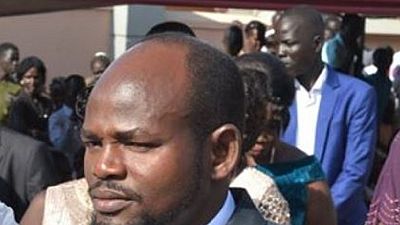 South Sudan People Defense Forces (SSPDF) officer, and nephew of President Salva Kiir who shot dead unarmed civilians in Sherikat, suburb of Juba on Wednesday has succumbed due to some head injuries, the army spokesperson has said.

The standoff between the gunman and the residents was triggered by a dispute over a piece of land.

Eyewitnesses said that the SSPDF officer; claimed colonel in the army, formerly known as Lual Marine arrived at the bus park on Wednesday and allegedly started shooting civilians indiscriminately over a land dispute, killing five and wounding seven others.

It is true that he [Lual] had passed on yesterday [Wednesday] at 9. P.m, and there is no reason to fake his death.

Protests broke out in the area where the incident took place as residents blocked roads and burned tyres, with placards written, “Lual is a killer, and “Kiir must go, among others, demanding justice for the slain victims.

On the same development, hundreds of citizens in Bor town of Jonglei State floods to the streets to protest the killings in Gumbo-Sherikat, East of Juba town. Both the protesters demanded justice for the victims.

President Kiir’s nephew Lual Akook Wol Kiir and six of his bodyguards were arrested after a shooting incident that killed at least five unarmed civilians, and injuring seven others.

As a result, the Office of the President issued a statement condemning the attack, saying a full probe was underway, he also added that Lual was in a hospital in a critical condition due to injuries.

However, the SSPDF spokesperson, Major Gen. Lul Ruai confirmed that suspect Lual had succumbed to the injuries.

“It is true that he [Lual] had passed on yesterday [Wednesday] at 9. P.m, and there is no reason to fake his death” Lul said. “The next step is that before he passed on he was arrested along with his six (6) body-guards that were involved in shooting in Sherikat, we are filing on with legal charges against those who are already in custody” he added.

Lul said the special court martial is going to be formed. “They will be tried and sentence in accordance with the laws.”

On the other hand, Police spokesperson Brig Gen. Daniel Justin also confirmed it, saying the case is opened and the suspects must face justice.

“I can confirm to you that he passed on yesterday (Wednesday) night but probably here in Juba,” Maj. Gen. Lul Ruai https://t.co/GMU9KT1E7h

Lual has been accused of committed several crimes and terrorizing people in Juba, including heading unknown gunmen group in Juba.