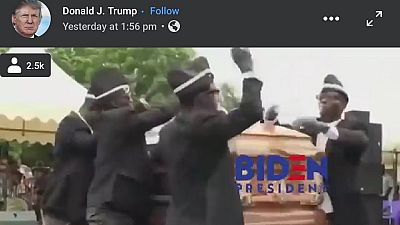 Trump re-posted a video on Facebook which showed the Ghanaian pallbearers dancing with a coffin that had the words “Biden president” embossed on the side. Biden, the VP of Barack Obama is Trump’s main challenger in upcoming elections.

The dancing troupe of have become a global sensation because of the viral use of their video and photo as a meme. Speaking to the BBC, Benjamin Aidoo, the group’s leader told the BBC that Trump’s post was the “ultimate endorsement” of their craft.

Not only did I see it Doks_Art, I think it is fantastic. You are a wonderful artist, never give up your dream!

A 2017 BBC report of the Dada Awu – Daddy is Dead (in local Twi parlance) – has garnered over 10 million views on YouTube. What could be termed the second round of internet fame, came just in time to coincide with the COVID-19 pandemic.

They have become so popular their figurines are being sold in parts of the world as others also recreate their dance in different settings.

Aidoo told the BBC that the said that the aftermath of the exposure has been overwhelming as he keeps getting calls and granting interviews from all over the world.

President of the United States, Donald J. Trump on Monday retweeted a portrait of himself done by a Nigerian artists who goes by the Twitter name Creative Doks.

The artist said it was his second portrait of the American leader adding that he had spent 70 hours using a ball pen to achieve the portrait which stood at 24×21 inches.

“This is my second portrait of President Trump, This time I really want him to see it… Please RT (retweet) till the president sees this,” the message accompanying his tweet read in part.

He tagged the accounts of the president, that of his son, Donald Trump Junior and his official POTUS (President of the United States) account. The PTOUS and White House accounts have also retweeted the photo.

But the president known for his prolific tweeting seems to have notice and responded same. “Not only did I see it Doks_Art, I think it is fantastic. You are a wonderful artist, never give up your dream!” Trump tweeted. 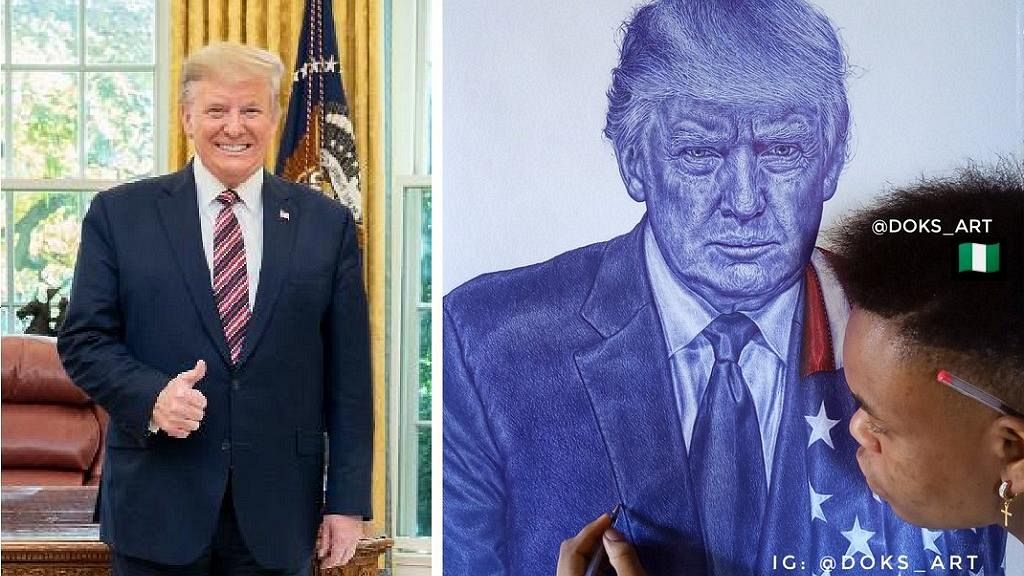 This is the second time that Trump is actively engaging an Africa-related tweet. Months back, he retweeted a video of a female football juggler.

The exploits of the Tanzanian lady further went viral following which she was interviewed by a number of international news outlets.