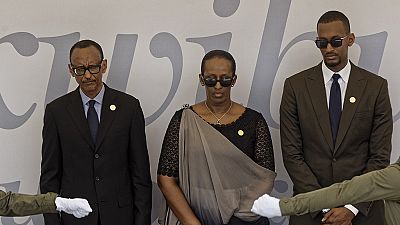 A son of President Paul Kagame has been appointed to the board of the Rwanda Development Board, RDB. 30-year-old Ivan Kagame is the eldest son of his parents. The Kagames have four children – three sons and a daughter.

The RDB is government machinery tasked with fast tracking the country’s economic development by enabling private sector growth. The US-educated Ivan joins as one of four new members announced by the Prime Minister’s office earlier this week.

In welcoming the new members, the board wrote about the young Kagame “Ivan Kagame is a partner at a Venture Capital fund, and co-founder of a leading energy company.

“Ivan brings a diverse skill set and vast experience in investment advisory services, entrepreneurship and investments management both in Africa and the USA. He holds a Bsc in Economics from Pace university and an MBA from the Marshall School at the University of Southern California.”

The other new members were: Solange Uwituze, Eric Kacou and Liban Soleman Abdi. They join a board currently headed by Itzhak Fisher with vice chair Evelyn Kamagaju, a former Auditor General of Rwanda. Diane Karususi, Faith Keza and Alice Nkulikiyinka complete the list of serving members.

RDB is behind high-profile sponsorship deals with English Premier League side Arsenal and French side Paris Saint-Germain – both deals under the “Visit Rwanda” label is to promote tourism in the East African nation.

RDB’s website describes its mission: “To transform Rwanda into a dynamic global hub for business, investment, and innovation.”

It pools all the government agencies responsible for the entire investor experience under one roof. It reports directly to the president and is guided by a board that includes all relevant sector ministers.

It is modeled on international best practice examples of Singapore and Costa Rica. It has advisory and hands-on support from global entrepreneurs and experts from Singapore Development Board, World Bank, IFC and the Office of Tony Blair.