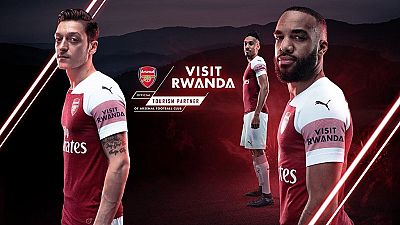 Rwanda has been unveiled as Arsenal’s first sleeve sponsor for the first post Arsene Wenger season.

English football club side, Arsenal announced the partnership with Rwanda Development Board as they unveiled the new kit for the 2018/19 season on Tuesday.

The three year deal will have the ‘Visit Rwanda’ logo feature on the left shirt sleeve of all Arsenal’s teams next season.

We're thrilled to be partnering with Arsenal and showcasing the vibrancy and beauty of our country.

We’ll have a sleeve sponsor on our shirts from 2018/19 – we’re pleased to welcome our Official Tourism Partner, visitrwanda_nowhttps://t.co/ruBw2nzLqR pic.twitter.com/wEOUeGsCNy

We are delighted to announce #Rwanda has become the official tourism partner of Arsenal and the Premier League football club’s first ever sleeve partner #VisitRwanda #AFC visitrwanda_now pic.twitter.com/o3O7jiX82b

Arsenal’s stars who are widely followed by Rwandans and Africans in the English premier league will also visit Rwanda and club coaches will host coaching camps to support the development of the game for boys and girls in the country.

The president of Rwanda, Paul Kagame, is an ardent Arsenal fan and usually shares his thoughts about the club on the social networking site, Twitter. Some of his mots recent tweets were thoughts about the departure of longtime Arsenal coach Wenger.

My take on my beloved Club Arsenal- a very good one at the game and a very good coach like a.Wenger ,this should not have been the kind of ending of an era. The coach is leaving and club trophy-less it was long coming! I am still a committed fan going forward :). Blame the owners

Arsenal has since announced Spaniard Unai Emery as the new head coach of the club. Emery has previously coached French club side, Paris Saint-Germain and led Spanish side, Sevilla to three consecutive Europa League titles.

Rwanda is one of the fast growing tourism destinations in Africa boasting diverse wildlife in its national parks including the famous mountain gorillas, a vibrant cultural scene and the dark tourism story of the tragic 1994 genocide.

Arsenal’s chief commercial officer, Vinai Venkatesham, said: “This is an exciting partnership which will see us support Rwanda’s ambition to build their tourism industry.’‘

Rwanda Development Board chief executive officer, Clare Akamanzi, said: “We’re thrilled to be partnering with Arsenal and showcasing the vibrancy and beauty of our country.’‘