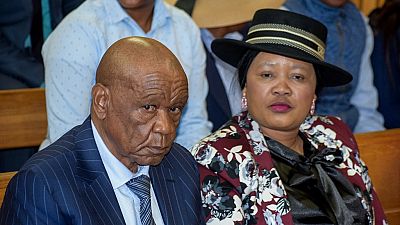 Lesotho’s Prime Minister Thomas Thabane officially tendered his resignation on Tuesday, ending a political crisis caused by his involvement in the assassination of his ex-wife in 2017.

“I come before you today to announce that the work you have entrusted me with may not be finished but the time has come for me to withdraw from the theatre of operations, to leave public life and my duties,” Mr Thabane said in a televised speech.

The head of government had announced his retirement on Monday in a brief speech to the press.

80-year-old Thabane, who has been in power since 2017 will be replaced as head of government by the current finance minister, Moeketsi Majoro.

The head of government has been in the hot seat since the country’s courts suspected him, earlier this year, of involvement in the murder of his ex-wife, Lipolelo Thabane, a few days before taking office.

His own party, the All Basoto Convention (ABC), and its governing coalition have been urging him to resign but the octogenarian has been hanging on to his post tooth and nail. He had only pledged to leave office “by the end of July” because of his age.

Last month, Thabane did not hesitate to take the army to the streets of the capital Maseru to, according to him, “restore order” in the face of his political enemies, who he described as factious.

Under South African mediation, the coalition government then undertook to allow a “dignified” exit for the prime minister. But the prime minister repeatedly refused to set the slightest date for his departure.