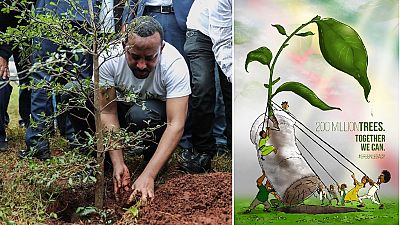 Ethiopia has announced efforts to consolidate government’s Green Legacy initiative which started in 2019. The Prime Minister’s office said today that the plan for this year was to plant 5 billion trees.

The information follows a presentation today (May 13) by the sector minister which reviewed the status of the project and laid out plans for this year.

The presentation was chaired by the Prime Minister with key stakeholders in attendance, amongst others: national steering committee members, technical committee members, regional presidents and influential personalities that will be engaged in public mobilization.

“While the target for this year is to plant 5billion trees, preparations to ready the required number of seedlings has been underway since the end of lasts year’s planting season,” a statement posted on social media platforms added.

Prime Minister Abiy Ahmed emphasized the importance of continuity and finishing what has been started, he reminded that the overall goal of the initiative was to plant 20 billion trees within the next few years.

In May 2019, a fundraising effort aimed at beautifying the Ethiopian capital, Addis Ababa, raked in over $25 million dollars from a section of the project supporters, the PM’s office said.

The Beautifying Sherger Project spearheaded by PM Abiy Ahmed subsequently held a dinner which was dubbed the most expensive in Ethiopian history. Guests paid $173,000 (£136,000) to dine at the former emperor Menelik’s palace.

The dinner, attracted about 300 business people, diplomats and other representatives. The aim overall aim was to raise a billion dollars for infrastructure projects across Addis Ababa.

Then came late May when Abiy launched the green legacy project in Oromia Regional State, the main dream being that Ethiopia wanted to plant 4 billion trees to reclaim its depleting vegetative cover.

In July, a campaign to plant 200 million young trees in a day kicked off as part of the “green legacy” project. Office of the PM reported that over 100,000,000 young trees had been planted after a six-hour period, which meant Ethiopia had already broken the 66 million record set in India.

The final figure of tree seedlings planted according to the Minister of Innovation and Technology came up to exactly 353 million, 633 thousand, 660 in a space of 12-hours.

The Minister said this was the verified final figure on the Number of Trees Planted according to the National Steering Committee. The Guinness Book of World Records said it has yet to verify the claim, the BBC reported.