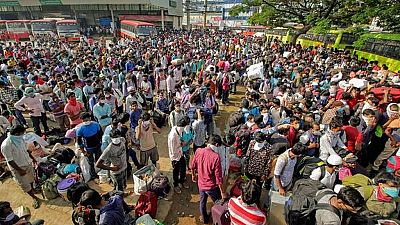 Thousands of migrants have been left stranded by the coronavirus pandemic, unable to move due to lockdowns and border closures around the globe, the United Nations said Thursday.
The UN’s International Organization for Migration said in southeast Asia, east Africa and Latin America, many were attempting to return to their countries of origin but were unable to do so.
Migrant camps were “very prone” to spreading the disease, IOM Director General Antonio Vitorino told reporters in an online briefing.
“There are thousands of stranded migrants all over the world,” he said.
“Lots of migrants that were on the move, some of them wanted to return to their country of origin, precisely because of the pandemic,” he said, adding that others had become “stranded” on their migratory routes.
“They are blocked in the border areas in very difficult conditions without access to minimal care, especially health screening,” he said.
“This is a source of enormous concern.”
Vitorino said the IOM was asking governments to allow aid workers in to access large groups congregating near borders.