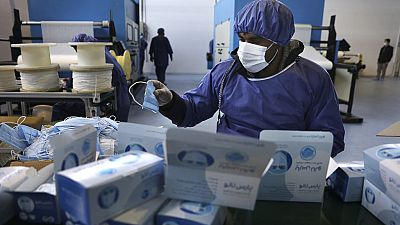 INTERPOL on Tuesday unmasked an international COVID-19 fraud racket straddling three European countries – Germany, Ireland and the Netherlands. Nigeria was mentioned, as home to an account that was to receive a fraudulent onward transfer sum.

The elaborate plan that targeted German health authorities had to do with securing of face masks in the wake of the COVID-19 pandemic. INTERPOL reported that what started as a chain of referrals eventually led to compromised emails and an advance-payment fraud scheme.

“It all started with an email address and website which appeared to be linked to a legitimate company in Spain selling face masks. Unbeknownst to the buyers, the site was a fake and their legitimate email addresses had been compromised,” the report ‘Unmasked: International COVID-19 fraud exposed’ said.

Nigeria popped up at the point of chasing advanced payments to the fraudsters. A majority of emergency payment, EUR 880,000 by the German buyers to the supposed Dutch supplier was moved from the Netherlands to the United Kingdom with the final destination being Nigeria, INTERPOL said.

The relevant paragraph read: “The Dutch Fiscal Information and Investigation Service quickly tracked down the EUR 880,000 which had been transferred from the German company. Nearly EUR 500,000 of those funds had already been sent to the United Kingdom, all of which was destined for an account in Nigeria.”

INTERPOL did not state whether the recipient of the said funds was known or will be traced. It is not known whether Nigeria’s Economic and Financial Crimes Commission, EFCC, had been contacted, neither have they commented on the issue.

Advance-fee fraud also known as 419 is one of the main crimes that the EFCC have busted over the years. It was one of the areas that earned the pioneer EFCC Chairman Nuhu Ribadu, national and global acclaim in the line of anti-corruption in a country that has been bedeviled by corruption in different levels of society.