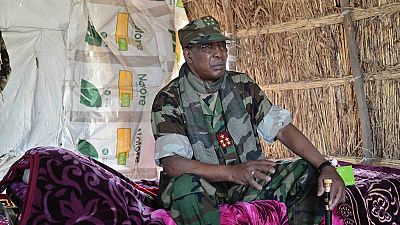 <p>Chadian President, Idriss Deby Itno joined the country’s soldiers in the frontline of the fight against Boko Haram terrorists in the country. Deby appeared in military fatigue last week as he led an operation to decimate the terrorists from Chadian territory.</p> <p>The operation codenamed “Operation Wrath of Bomo,” came after terrorists dealt the heaviest blow to the Chadian military after an assault killed over 90 soldiers.</p> <p>“We launched the “Wrath of Bomo” operation. We must defeat terrorism to allow our people and especially those of Lake Chad to live in peace. This is the whole meaning of the fight that our valiant soldiers are waging against Boko Haram,” Deby said in a <a href="https://twitter.com/IdrissDebyI/status/1244332591903379457" title="March 29">tweet two Sundays ago</a>.</p> <p>The offensive according to reports took place at Kelkoua bank and Magumeri where the army destroyed several Boko Haram bunkers, recovered cache of arms and arrested a top Boko Haram commander.</p> <p>It was gathered that the Chadian troops allegedly set free some Nigerian soldiers held captive by terrorists at Magumeri, a local government in the northern Borno State. Five days later, April 4, the president announced that Boko Haram had been completely removed from Chadian territory. </p> <p>“I went down this morning to Kaiga-Kindjinria. No element of Boko haram is present in the islands of Lake Chad. Congratulations to our Defense and Security Forces who have cleaned up the entire island area,” he <a href="https://twitter.com/IdrissDebyI/status/1246414308269068294">declared on Twitter</a>.</p> <p>On the same day Deby met with head of the commander of the Multinational Joint Task Force fighting Boko Haram in the Lake Chad region. Deby said the meeting in Kaiga-Kindjinria, with Nigerian General-Major Ibrahim Manu Yusuf bordered on security deployments on the islands of Lake Chad.</p> <p>Deby was back to the area on Sunday when he visited troops who had been injured during the offensive. He stressed that the soldiers had put their best foot forward for their fatherland. </p> <blockquote class="twitter-tweet"><p lang="fr" dir="ltr">À Baga-Sola, j’ai rendu visite, cet après midi, aux soldats blessés lors des opérations lancées contre les illuminés de Boko Haram. Ils sont fiers d’avoir accompli une mission sacrée au service de leur chère patrie. <a href="https://t.co/Ba08pIHSWz">pic.twitter.com/Ba08pIHSWz</a></p>— Idriss Deby Itno (@IdrissDebyI) <a href="https://twitter.com/IdrissDebyI/status/1246879087056035841?ref_src=twsrc%5Etfw">April 5, 2020</a></blockquote> <script async src="https://platform.twitter.com/widgets.js" charset="utf-8"></script> <p>A video making the rounds on Twitter captures Deby disclosing that Boko Haram’s factional leader, Abubakar Shekau, had narrowly escaped in the town of Dikoa. He goes on to advise Shekau to surrender or be killed inside his Dikoa hideout.</p> <p>“Abubakar Shekau was lucky, he was at Dikoa during the attack. He fled from Dikoa but we know where he is,” the president stressed during <a href="https://www.dailytrust.com.ng/chadian-president-to-shekau-surrender-or-die.html">a state broadcast</a>.</p> <p>Though birthed in northern Nigeria’s Borno State, the Boko Haram insurgency has taken a regional dimension with the group launching attacks across the Lake Chad region which borders Nigeria, Niger, Cameroon and Chad. The group is one of Africa’s deadliest along with Somalia’s Al-Shabaab and Al-Qaeda in the Sahel region.</p>