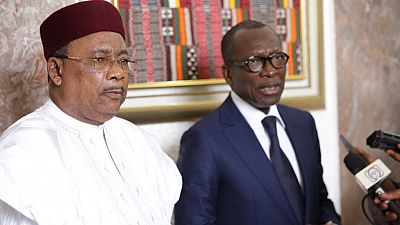 Niger president Mahamadou Issoufou says he agrees with his Benin counterpart, Patrice Talon, that lockdowns are not Africa-friendly and that the continent stood to lose more with the ongoing COVID-19 pandemic.

Issoufou was speaking in an exclusive interview with French broadcaster France 24. Whiles discussing the overall impact of the pandemic on Africa, he called for a “Marshall Plan” from the international community to help African countries face the unprecedented health crisis.

Asked about need for international support and Talon’s claim that Benin would not resort to lockdowns for particular reasons, the Nigerien president said: “President Talon is exactly right.”

Continuing: “… what we can see is that even the most developed countries are overwhelmed, so we need to be even more prepared because we will be even more affected by this crisis because our medical systems are more fragile than that of those other countries.

“And that is why we have expressed our need for international support to be able to deal with this crisis. We need more support from other countries around the world. This is what we can see from globalization, because of that, the world we are living in now is a truly a global village.

“This is going to push us into a new paradigm especially in terms of political and economic governance around the world. We need more solidarity, we need more equality. Because in this world, we are all in the same boat and if that boat sinks, then we all sink with it.

Turning to the French presence in the Sahel region, Niger’s president insisted he did not fear a French military withdrawal over the pandemic, despite the first four cases of coronavirus being detected this week among the French troops of Operation Barkhane. Issoufou said he was convinced that Paris was committed to the fight against terrorist groups.

The Benin president last week announced that the West African country could not enforce public confinement because it lacks the “means of rich countries” who are fighting the pandemic.

“Rich countries are putting up huge amounts of money and some are even resorting to barely disguised monetary solutions, or printing notes to prevent what would otherwise be unavoidable socio-economic chaos,” he said in a televized address.

“Benin (…) does not have such means,” Talon said. “If we take measures which starve everybody, they will quickly end up being defied and violated.”

Whiles most countries have opted for partial or full lockdowns, Benin has till date applied a ‘cordon sanitaire’ around 8 major urban areas, including the business capital Cotonou where public transport has been halted.

Benin as of April 3 had 13 cases with one recovery. Niger on the other hand had 98 cases with five deaths. Africa’s overall tall had passed 7,200 with South Africa being the most hit with 1,505 cases. The four African countries without confirmed cases are: Lesotho, Comoros, Soa Tome and Principe and South Sudan.