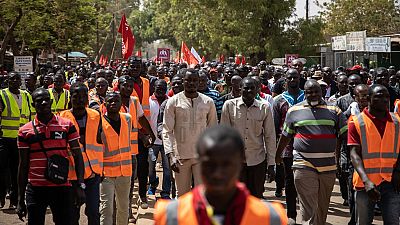 Public sector workers in Burkina Faso on Saturday protested against a new tax imposed on allowances and bonuses for civil servants.

With support from private employees, they undertook a peaceful demonstration in the Burkinabe capital of Ouagadougou.

“We have demanded, purely and simply, not only the withdrawal of the implementation of the IUTS on premiums and allowances for workers, whether public, semi-public or private, but also the immediate reimbursement of the cuts that have been made”, Bassolma Bazie, spokesperson for the Workers of Burkina trade union said.

According to Burkinabe authorities, it was essential to bring civil servants at par with private sector workers, who are already subject to the tax. Labour unions are planning a general strike from March 16-20.

President Roch Marc Christian Kaboré, who has been in power since 2015, is struggling to implement his National Economic and Social Development Plan. The plan aims to substantially reduce poverty in the West African nation.

His government has failed to secure the 28 billion euros needed to fund it. The fight against terrorism is putting a considerable strain on resources of the Sahelian nation and impeding development.