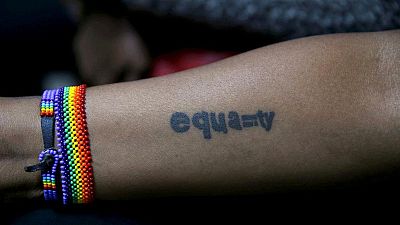 In recent times, a lesbian couple was denied a wedding venue because of their sexuality.

“They said to us unequivocally they would not host us because were a same-sex couple, they said we were the same gender and they said they would continue to refuse people because as of yet no court has said anything about it. Which was why we made the decision to start the Same Love campaign and to fight against it because obviously, sure, I can’t even explain to you how it hurts”, Heeks recounts while attending the Cape Town pride.

I can’t even explain to you how it hurts.

South African human rights commission says it is targeting schools to educate students on the need for acceptance through fresh orientation.

“We have targeted specifically also now the schools, together with the department of basic education, there will be new life orientation textbooks launched very soon with a human rights component to it very much infused human rights within these text books and we will like to encourage all schools in this country to make use of these text books”, Andre Guam said.

South Africa was the first nation in Africa to legalize same-sex marriage. The law bans people from discriminating against gay relationships.

Critics within the continent have argued that homosexuality contravenes the values of Africans and should not be encouraged.