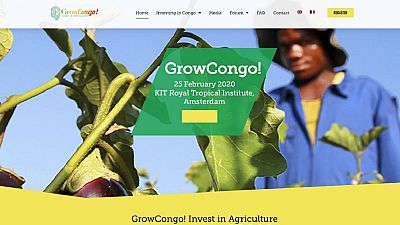 Two Prime Ministers – of Congo Brazzaville and Netherlands – will be in attendance when a key agro investment forum opens in the Dutch capital, Amsterdam, on February 25th. The event takes place at the KIT Royal Tropical Institute.

The GrowCongo! Invest in Agriculture investment conference is a high-level international forum organized by the Congolese government and with suuport of the World Bank and International Fund for Agricultural Development, IFAD.

It is facilitated by the Netherlands – Africa Business Council, NABC. This forum will have a focus on the sector of agriculture, the food chain and agro-industry (including livestock, fisheries, aquaculture, and land).

The forum will be attended by a high-powered delegation from Brazzaville led by PM Clement Mouamba and Henri Djombo, Minister of State for Agriculture, Livestock and Fisheries among other officials. The Congolese PM officially invited his Dutch counterpart March Rutte to join him in the opening.

In his official message ahead of the forum, Minister Djombo underscored the importance of agriculture to the Congolese economy and the national drive to eradicate poverty. He stressed that the agropastoral and fishery sector … is and remains, undoubtedly, the engine of growth and economic diversification.

He cited the government’s National Development Plan (PND) 2018-2022, which gives agriculture the driving role of growth through the diversification of the economy. The estimated investment needs of this ambition are around 1139 billion FCFA, or about 2 billion US dollars.

Aside the World Bank, other IFAD as key partners of the forum, the AfDB, the European Union, FAO, WFP, AFD, JICA, the Kuwait Fund, and other bilateral and multilateral partners have shown their support for the successful completion of the forum.

About NABC and its involvement

Based in the Hague, the Netherlands-African Business Council (NABC) represents over 300 Dutch and international companies that do business in Africa.

With a total of 20 staff members, they organise trade missions and events for members and partner organisations. The Council has an extensive and diverse network of more than 300 companies with a growing portfolio.

Commenting on their involvement; Marina Diboma, Deputy Managing Director of NABC said: “Previously we have been working for the Dutch Government and the European Union, but this World Bank assignment is new to us.

“We will do all it takes to make this an unforgettable event. The Republic of Congo has set a vision to diversify its economy through agriculture. Its agriculture development will take place through partnerships.

“It is an honour that the Netherlands has been chosen to host GrowCongo!, the first international forum of the Republic of Congo. As NABC, we are proud to be part of this journey and tell the story of Congo,” she stressed.