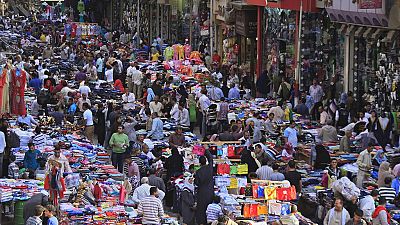 Egypt’s statistics office said on Tuesday the country’s population has surpassed 100 million, highlighting the threat of overpopulation in a poverty-stricken country where many live in crowded megacities.

The North African country retains its position as the most populous Arab nation and Africa’s third most populous country behind Nigeria and Ethiopia.

A counter installed atop the Central Agency for Public Mobilisation and Statistics (CAPMAS) ticked over into nine digits for the first time, the agency said.

A new baby is born in Egypt roughly every 17.9 seconds, the statistics body calculated.

Gomaa Shehata, a 33-year-old cafe worker in an upmarket Cairo suburb who hails from an impoverished area of the capital, became a father for the second time to a son last week.

“All I want from life is for my children to grow up with clothes on their backs and to be healthy,” he told AFP.

His monthly wage of 2200 pounds ($140), plus the tips he relies on from serving his customers drinks and coals for their shisha pipes, barely sustains his family.

Nearly one in three Egyptians live below the poverty line, according to CAPMAS figures released last year.

The unemployment rate is around 10 percent, with millions leading precarious lives often without social protection in the informal economy.

“I’m really sick of life at the moment. I’d like to have a job where I can spend more quality time with my kids,” Shehata said.

He currently works at least 16 hours a day without counting a taxing daily commute.

Most Egyptians live on a stretch of arable land along the River Nile that comprises eight percent of Egypt’s territory.

The river, which Egypt shares with Sudan and Ethiopia, critically provides around 97 percent of Egypt’s water needs.

But with high population densities in urban centres, urban planning is difficult.

Baheya Tawfik, a single mother of three who works in a retirement home, says navigating around the megalopolis of Cairo, which has reached 9.9 million inhabitants, can be a nightmarish trip.

From her home in a lower income neighbourhood near the Nile, she catches two underground trains and a tuk-tuk rickshaw to get to her job on the other side of the city.

“It really is packed. People rush to their jobs carelessly pushing and shoving because they want to catch the next train but we’re thankful nonetheless to have a steady job,” the 33-year-old said.

Birth rates in Egypt have skyrocketed in the past three decades with around 1.5 million babies born every year, but they have recently slowed down as Egypt’s government has encouraged smaller families.

Overpopulation has presented a myriad of challenges for authorities in recent years even with policies to stem the rapid growth.

Planning Minister Hala al-Saeed said at the CAPMAS conference Tuesday that more funds would bolster the health budget in 2021.

“Apart from the physical problems of population density, the social problems are compounded,” Heba El Laithy, a Cairo University economics professor who has worked with CAPMAS, told AFP.

“Poor people tend to bear more children because of the idea that they will help them out socially and economically in the long run,” she said.

“Children are seen as breadwinners as they progress with age and that they would help the parents as they get older,” El Laithy added.

Egyptians numbered around 57 million 30 years ago.

President Abdel-Fattah al-Sisi said at the time that terrorism and overpopulation represented the two biggest threats to Egypt.

As with the majority of African countries, Egypt has a youthful population with just over 60 percent under the age of 30.