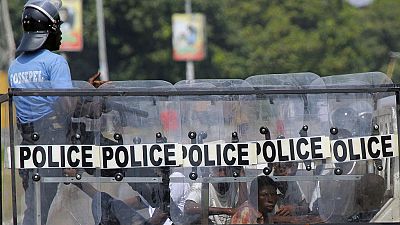 Protest deaths have been recorded in Guinea where anti-government protesters have been clashing with security forces over a move by government to amend the constitution ahead of presidential polls.

Human rights groups have criticized what they say is a use of brutal force against unarmed citizens calling on the authorities to conduct investigations on the deaths.

But President Alpha Conde says some civilians accosted during the protests were armed and could likely be those fomenting deadly incidents. He was speaking in an exclusive interview with Africanews’ editor-in-chief Nathalie Wakam in Conakry.

“The problem is to know who is shooting, the gendarmes are not armed, the policemen don’t have guns, we have arrested people, armed civilians, so there are civilians, we have shown pictures of civilian armed with guns.

Asked specifically about the deaths he responded: “No! we did everything to avoid it; the army today is a republican army, when there are demonstrations the soldiers are in barracks now, I don’t exclude that there could be mistakes, but that they say that the police shot people, I don’t believe it at all, but we to investigate.”

At the heart of the protests which started in 2019 is opposition to constitutional changes which will eventually allow Conde to extend his stay in office. He came to power in 2010 and won reelection in 2015.

Polls are slated for this year but Conde has proposed amendments that could see changes agreed by parliament and voted at a referendum allowing an extension of the presidential mandate. He has however not explicitly stated that he will contest in the polls as his term runts out.

“… then we took La Francophonie to accompany us, so it was done with La Francophonie, so the opposition is aware of everything, they told stories, that is to say that they were rushed to speak without even waiting for the actual census results, which today contradicts what they told us.

On the subject of the fairness of the polls when they are held, the president said: “We will do everything possible to ensure that the elections are held in a transparent manner and the government will make all the necessary arrangements for this.”