Gathering heads of state, ministers and energy innovators together in the UAE capital, Abu Dhabi Sustainability Week ran from January 11-18.

Since it was established in 2008, the event has looked to accelerate domestic and global sustainable development.

At the opening of the forum, the UAE’s Minister of State highlighted the country’s investments in energy projects and its projections for the years ahead.

“Within the UAE, we have grown our renewable energy portfolio by over 400% in the last ten years. And we’re well on track to double it again, in the next ten,” said His Excellency, Dr. Sultan Al Jaber, who is also the CEO of Abu Dhabi National Oil Company.

Al Jaber went on to explain the ways in which the UAE was complementing its clean energy portfolio.

“In 2020, we will become the first country in the region to deliver safe, commercial and peaceful nuclear power.” he added.

Whilst Commissioners, CEO’s and world leaders held high-level meetings at Abu Dhabi Sustainability Week, energy innovators of tomorrow were being honoured for their green credentials. 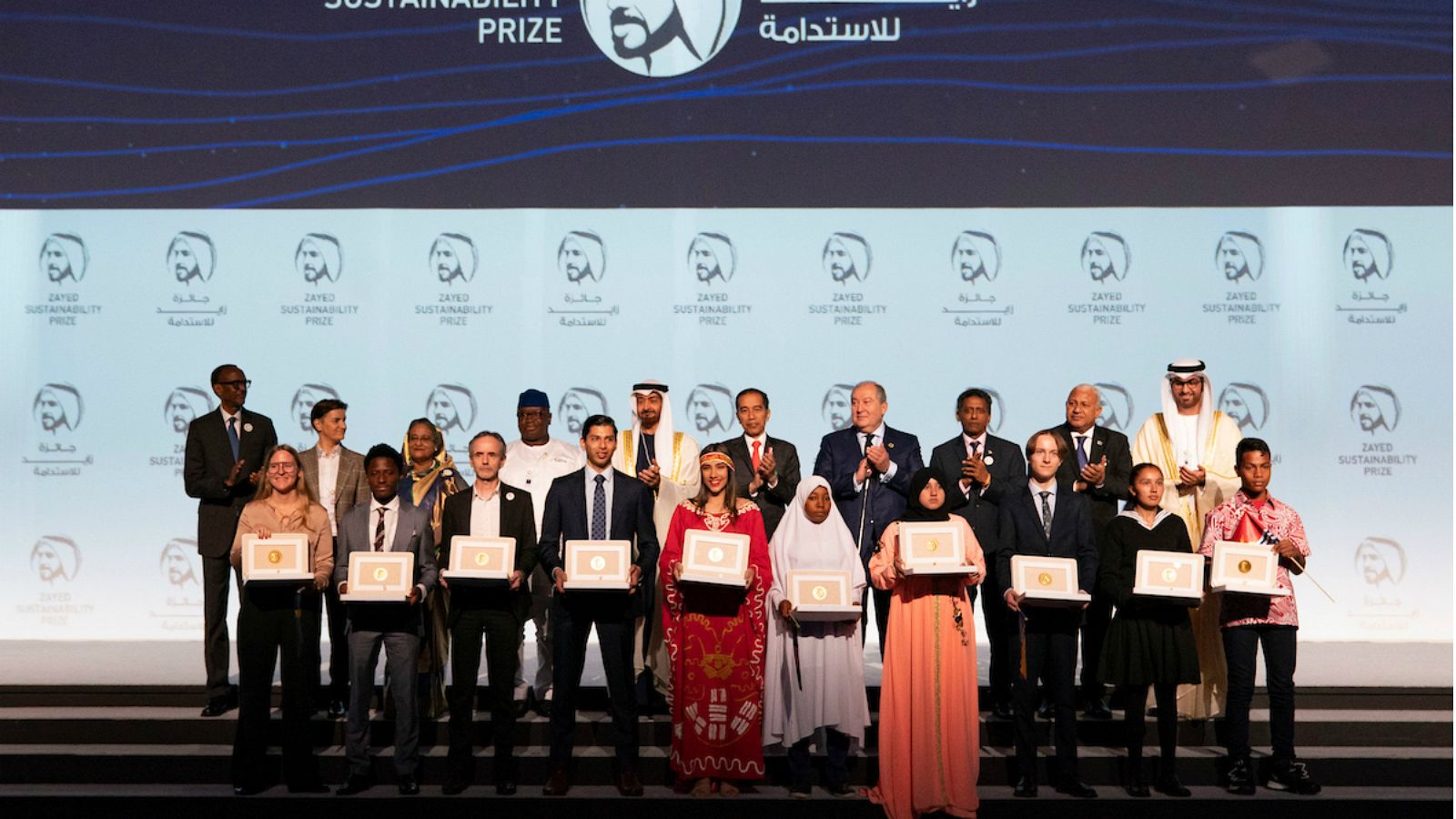 Ten winners, from SME’s to high schools and non-profit organisations, were the recipients of the $3 million dollar Zayed Sustainability Prize.

Recognised for having a positive energy-related impact was Electricians Without Borders.

The French company, which operates in around 38 countries, provides water and electricity to underprivileged communities, including refugee camps. 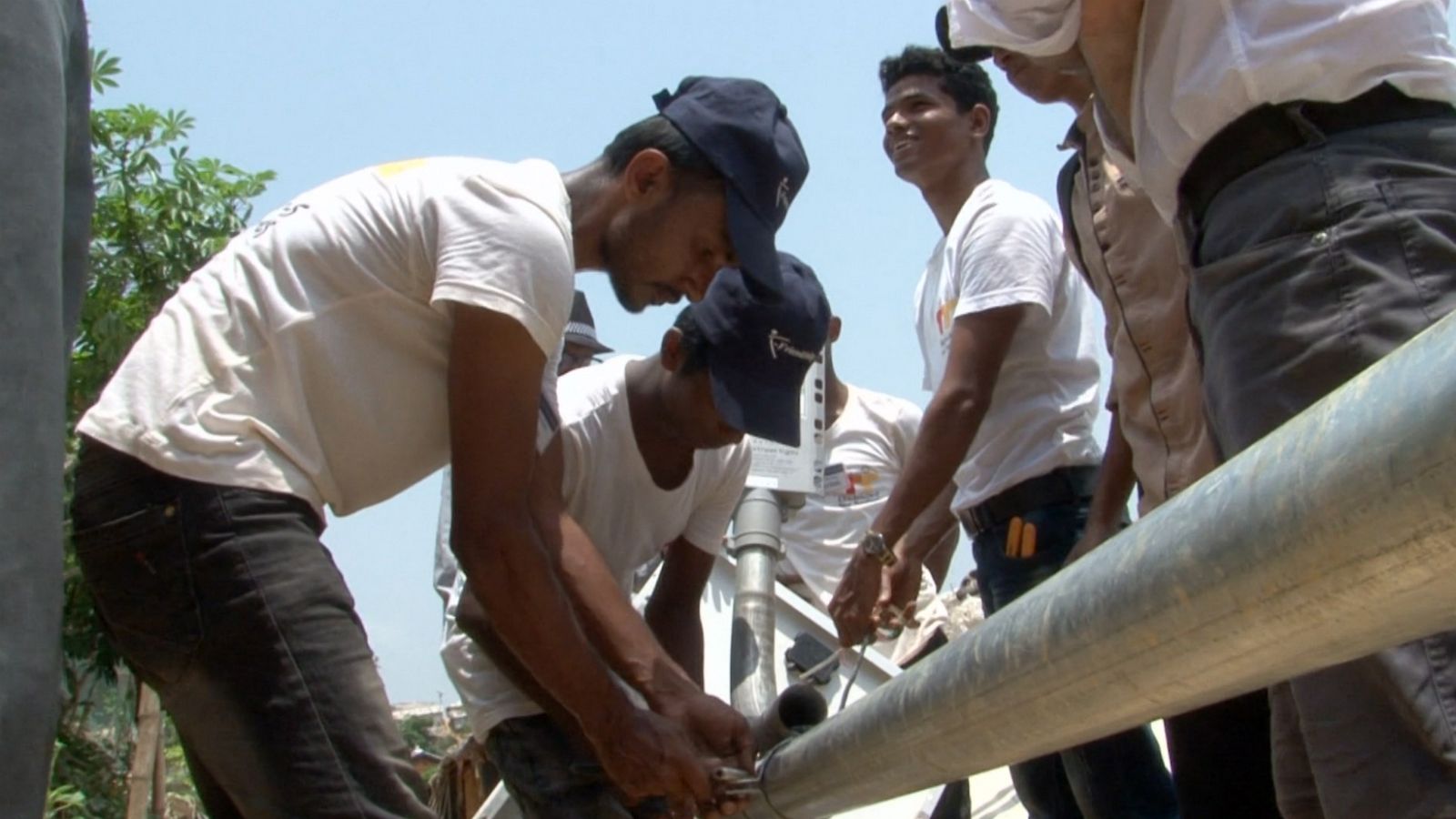 The firm’s President told Euronews about his ambitions for the project going forward.

“The project, since it began, has impacted around 50,000 people,” said Hervé Gouyet, President of Electricians Without Borders. “And there are still a number of people in refugee camps – nearly a million people – so there are many, many, many things we could do for them. Unfortunately, the number of displaced people around the world exceeded 80 million.”

Under the umbrella of ADSW, the International Renewable Energy Agency (IRENA) convened.

As did the Atlantic Council Global Energy Forum, where the executive director of the International Energy Agency (IEA), said that as industries and governments struggled to tackle climate change, the gap between “perceptions and the reality” of the problem was widening.

To discuss the challenges that policy makers are facing today, as they grapple with climate change and geopolitical pressures, Inspire Middle East spoke to the Energy Commissioner of the European Union Kadri Simson whilst she was in Abu Dhabi. 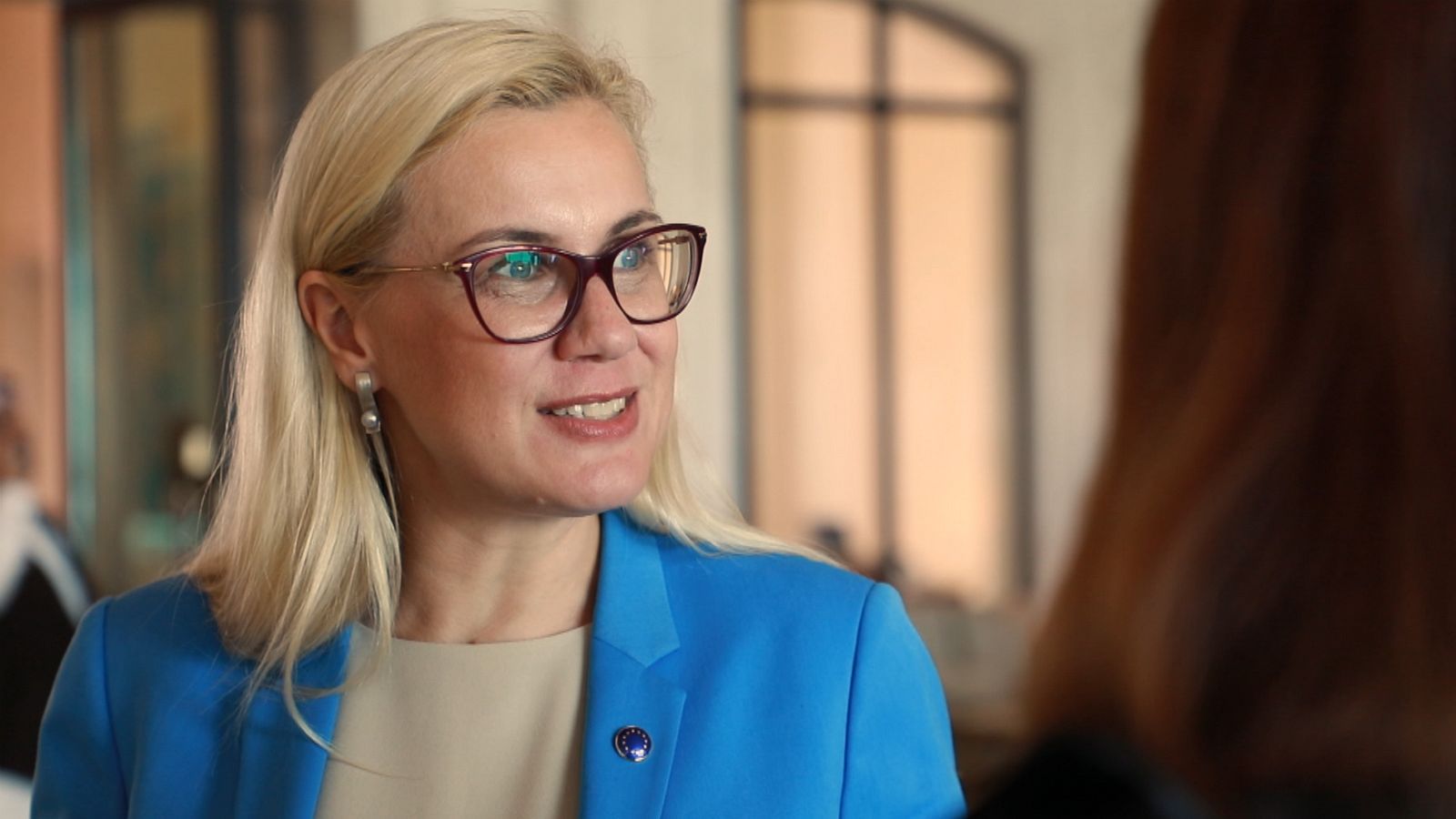 Rebecca: Let me start by asking you why you’re here on the ground in Abu Dhabi. Would I be correct to presume that you’re looking for partnerships? And if so, what has been secured or discussed?

Simson: That’s very correct. We are looking for partners, because the European Union has adopted a very ambitious climate agenda, but we won’t make a big difference if we achieve what we have promised, alone.

Because right now, the European Union’s greenhouse gas emissions, they are only nine percent of the global emissions. So, we need supporters, we need partners.

Rebecca: Let me pick up on that, because in terms of CO2 emissions, they were at record highs last year. Plus, the head of the IEA has said that there’s a widening disparity between the “perception and reality” of the problem of climate change. Would you agree with that? How can we fix it?

Simson: We can lead by example, and in European Union we have decided that each and every member state will implement a national energy climate plan.

So, right now we know that we have concrete plans of how to achieve what we have promised by 2030. And that means, if we do everything that is already agreed, we will decrease our greenhouse gas emissions by 45%.

Rebecca: Turkey and Russia have launched the TurkStream pipeline, which will take Russian natural gas to Europe via Turkey. Talk to me about the significance of this deal for Europe.

Simson: The European Union is the biggest natural gas importer, and for us it is very important that we will have diverse routes. We want that each and every member state has different providers. So, for every new pipeline, and old pipeline too, that comes from the third country. There is a rule, that it has to be compatible with our regulations, with our standards.

That means, unbundling fair tariffs. It has to be open to third parties. 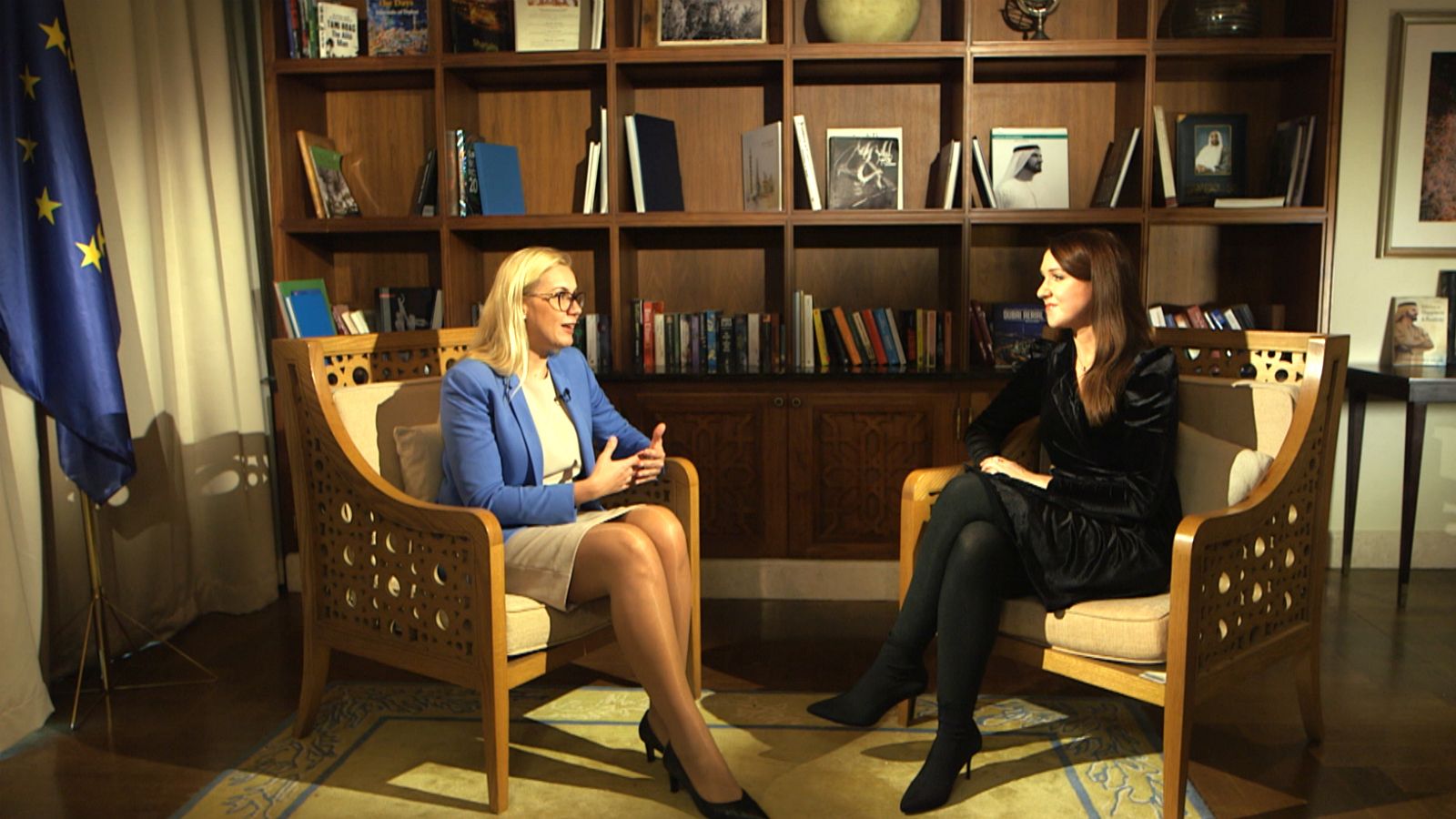 Rebecca: Diplomatically, what does the deal imply for ongoing relations between Moscow and Kiev? Because relations have been deteriorating since 2014, and this pipeline will reduce gas deliveries by Russia through Ukraine. So, what might we expect to happen?

Simson: Last year, we were just hosting trilateral talks between Russia and Ukraine. And it is very welcomed that they reached an agreement, and there is a new agreement for the next 5 years.

So, from a European point of view, we do see that Ukraine as a transit country is very reliable, and we welcome that this agreement was reached.

Rebecca: What do you make of the U.S. wanting to impose sanctions on the TurkStream deal in a bid to deter, as they say, “Russian aggression”?

Simson: Well, we hope to have good cooperation with the United States, so that all those actions that are lawful will be also accepted.

Rebecca: There is also, of course, the EastMed pipeline deal for Europe. Turkey are not happy about this potentially happening. They say it’s actually not necessary, given that a pipeline already exists – the Trans-Anatolian pipeline. Are they right to hold this view?

Simson: We want to have diverse routes and in addition to the pipelines, we also see the role of LNG. So, different routes, different suppliers, this is part of our policy to achieve energy security.

Rebecca: We sit here in Abu Dhabi, we’re not too far from the Strait of Hormuz, such an important oil choke point for the safe delivery of energy to Europe and beyond. How concerned are you about the current tensions between the U.S and Iran, and the potential of the situation to affect the operations in the Strait?

Simson: Well, we all know that the Strait of Hormuz has enormous importance for all the oil transit, not only to the European Union. But overall, globally – coming from the European Union – we believe that diplomacy is a powerful tool and we are always open to diplomatic negotiations. And that is also what we will do in the future.

Rebecca: It’s been a pleasure. Thank you, Commissioner.

Simson: Thank you very much.

Maria from Russia visited the Mohamed Bin Rashid Al Maktoum Solar Park in the UAE, the largest single-site solar park in the world.

Pablo from Mexico was amazed when he drove by the Tarfaya wind farm in Morocco, saying the world is a better place with renewable energy.