Chinese FM in Zimbabwe as he concludes African trip 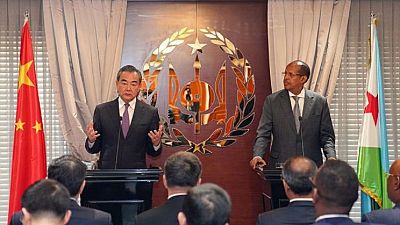 He will hold discussions with Zim govt Officials on ways to further the bilateral relations & corporation between the two countries. pic.twitter.com/r9EL0evzDs

The Chinese FM is said to be on a traditional beginning of year trip to Africa, this time visiting five nations Egypt, Djibouti, Eritrea, Burundi and Zimbabwe reports Zimbabwe state newspaper , adding that it is to show how Beijing values its relations with the continent.
China is the biggest investor of infrastructure projects currently underway in Zimbabwe and it is expected that the visit will also give fresh stimulus to mega projects such as the US$1,1 billion Hwange 7 and 8 power expansion project, the US$100 million New Parliament building in Mt Hampden and the US$153 million Robert Mugabe International Airport facelift, among other projects says the report.

Wang Yi is set to visit a Zimbabwe tobacco farm and meet with President Emmerson Mnangagwa says the Washington Post , adding, China has a strong presence in Zimbabwe, with investments spanning from energy to agriculture, mining and trade in wildlife.

While in Burundi, Wang said China attaches importance to Burundi’s concern in the Great Lakes region and is willing to play a constructive role for the region’s peace and stability reports“CGTN Africa:https://africa.cgtn.com/2020/01/12/chinese-burundian-fms-hold-talks-vowing-to-strengthen-cooperation/

State Councilor & Foreign Minister Wang Yi joined the reception team. He was warmly welcomed at the airport in Bujumbura. The Burundi people are famous for their dancing and hospitality. pic.twitter.com/X9M7Prgu6W

In Egypt he promised to help the country combat extremist violence and grow its economy.

In Djibouti China extended its offer to strengthen cooperation with Djibouti in fleet escort, peacekeeping, counter-terrorism, and combating piracy, in order to make a higher contribution to Africa’s peace and safety

The FM is reported to have visited Kenya as well. Where he toured the standard railway gauge linking the capital city Nairobi with the coastal city of Mombasa that China built.