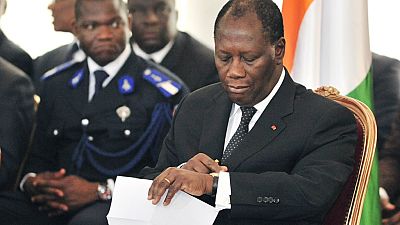 Ivory Coast’s president Alassane Ouattara on Monday said he would propose “modifications” to the country’s constitution, even as he rubbished claims by the opposition that he plans to sideline opponents from this year’s presidential elections.

In ceremonies to mark the New Year, Ouattara said, “In the first quarter of the year, I will put to parliament proposals for modifications to the constitution.”

The aim is to make the constitution “more coherent… to further consolidate the state of law and bring institutions closer to our fellow citizens,” he said.

I have just turned 78 and I'm not thinking about excluding anyone, myself included.

‘Nobody will be excluded’

Ouattara gave no details but addressed opposition warnings about introducing age restrictions that would bar former presidents Laurent Gbagbo, 74, and Henri Konan Bedie, 85, from running for office in October.

Such a move would also exclude Ouattara himself.

“I would like to reassure one and all that this is not about ‘stalling’ anyone. As I have said, anyone can be a candidate,” Ouattara said.

“I have just turned 78 and I’m not thinking about excluding anyone, myself included.”

Ouattara came to power in 2011 after a prolonged crisis that ended with the ouster of then-president Laurent Gbagbo following bloodshed that claimed 3,000 lives.

He has kept the country guessing as to whether he will run again.

He maintains he has the right to bid for a new term under a change of the constitution in 2016, which the opposition denies.

Municipal and regional elections in 2018 were marked by violence and fraud allegations.