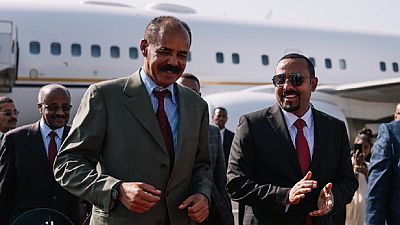 Eritrean president Isaias Afwerki is in Ethiopia on an official visit. He was met at the Addis Ababa International airport by his host Prime Minister Abiy Ahmed.

Abiy earlier this month mentioned Afwerki multiple times in his Nobel Peace Prize lecture referring to him as a comrade in peace.

The duo have met multiple times since they signed a peace deal in July 2018. Meetings have been in Addis Ababa, Asmara as well as in Riyadh and Abu Dhabi in the case of the Middle Eastern cities, they signed further peace deals and were awarded medals.

Abiy became the 100th Nobel Peace Laureatte for his efforts at achieving peace with Eritrea after over two decades of conflict. Since the 2018 peace deal relations between the two countries have been normalized in sveral areas.

Borders were unilaterally shut this year on the Eritrean side. Experts have stressed that there was a lot to be done in order to institutionalize the peace deal.

Abiy said the deal was iron-clad in his Nobel lecture. He said there was going to be a meeting to celebrate the award with Afwerki and all Eritreans.