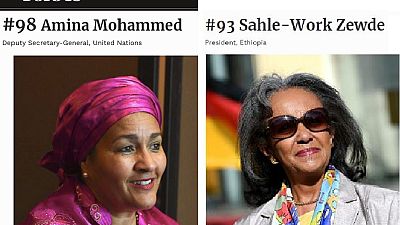 Africa has two slots on the recently released Forbes list of 100 Most Powerful Women in the world. This is an increase of one from the last two years.

The two women are linked by politics and diplomacy. They are Ethiopian president Sahle-Work Zewde, who was the only African in the 2018 list. She is joined by Deputy United Nations secretary-general Amina Mohammed of Nigeria.

Back in 2017, the only African listed was Africa’s richest woman and daughter of former Angolan president Isabel dos Santos.

In 2016, Africa had three slots, two presidential and one in commerce. Then Liberia president Ellen Johnson-Sirleaf, Mauritius president at the time, Ameenah Gurib-Fakim were listed. Nigeria’s business mogul Folorunsho Alakija was the third African.

“In 2019, women around the globe took action, claiming leadership positions in government, business, philanthropy and media. These trailblazers are not to be messed with,” Forbes wrote about this year’s candidates.

What Forbes wrote about Sahle-Work Zewde

What Forbes wrote about Amina Mohammed

Top 10 and other notable candidates