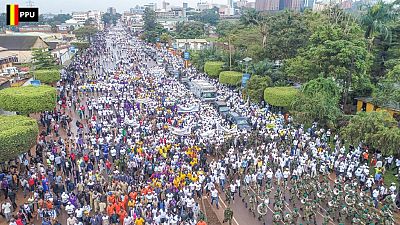 Ugandan president Yoweri Kaguta Museveni joined a broad-range of citizens for an anti-corruption walk on Wednesday.

Thousands of people from government agencies, religious, traditional and civil society leaders joined other citizens for the walk, the president said on Twitter.

“I am very glad we turned up in big numbers as we continue the war towards a corruption free Uganda,” he added.

But citizens camped under the president’s tweet that featured an aerial photo of the walk, expressing views about the causes of corruption, about government’s complicity in corruption and why the fight was bound to be lost.

Last week when the information about today’s walk was published in the media, opposition lawmaker and musician, Bobi Wine, rubbished the walk describing the president as “the godfather of corruption.”

Museveni has been in power since the mid 1980s and is expected to contest when elections are next held. A legislative vote that removed age limit that would have made him ineligible was passed amid chaotic scenes in the parliament.