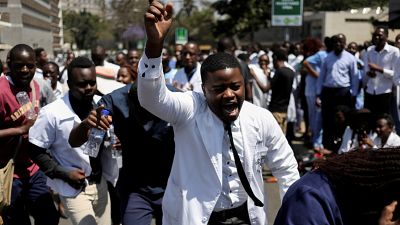 Zimbabwe state doctors who were fired for going on strike have rejected a government offer to return to work, their union said on Friday.

The doctors went on strike on September 3 to protest against poor wages, in some cases less than US$100 a month.

President Emmerson Mnangagwa’s government, which responded to the job boycott by firing 448 doctors and pursuing disciplinary action against more than 1,000 others, on Thursday offered to reinstate them if they returned to work within 48 hours.

According to the Zimbabwe Hospital Doctors Association (ZHDA), the last wage offer by the government would see the doctors earning a total package, including allowances, of Z$3,900 (about US$240) per month.

In the capital Harare, Parirenyatwa Hospital was deserted, with only a handful of desperate patients being attended to by nurses.

Several patients who were turned away told Reuters that they were extremely disappointed and stressed about not getting any medical attention especially because they cannot afford to pay for private doctors.

Speaking to Reuters, state doctor Tawanda Zvakade said the doctors’ grievances were not just related to remuneration, but also advocacy over lack of resources in the hospitals.