WHO sounds alarm on Ebola due to Congo insecurity 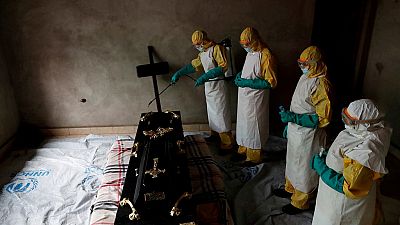 About 360 people are at potential risk of Ebola after contact with an infected person in eastern Congo yet many of them are out of reach due to clashes and insecurity, the World Health Organization said on Friday (November 22).

Dr Michael Ryan, executive director of the WHO Health Emergencies Programme, urged the government and all sides to enable aid workers to access several areas where the deadly virus may be spreading.

Islamist militiamen killed at least 19 people in eastern Democratic Republic of Congo, stepping up attacks on civilians in response to a military campaign against them in border areas with Uganda, local officials said on Wednesday.

One case has generated over 360 contacts.

The assailants, who the officials said belong to the Allied Democratic Forces (ADF), a Ugandan Islamist group, burned down a Catholic church near the city of Oicha.

Ryan said that although only 7 cases of Ebola were recorded in the past week, it was unable to stamp out the deadly virus due to insecurity.

“The difficulty we collectively face at the moment is just when we need that unlimited and unfettered access to communities we have lost that access in key areas,” he told a news briefing.

spread of the virus

“This is a very dangerous and alarming development,” he said.

A male driver died of Ebola in Oicha, North Kivu province, after visiting three health care centres, Ryan said, adding that many other drivers had handled the body at the funeral.

“That one case has generated over 360 contacts – which is a large number of contacts for any case. We know that person was highly infectious at the moment of death. That is why we are so concerned,” Ryan said.

At least 62 of the 200 contacts in Oicha were deemed at “extreme high risk”, he said, but aid workers had only located 19 of them. About 159 had fled to Kalunguta where most were being monitored.

There have been 3,298 Ebola cases including 2,195 deaths since the outbreak was declared in August 2018, Ryan said.

“By the time this Ebola outbreak in Congo is over the international community will probably have spent $1 billion.”