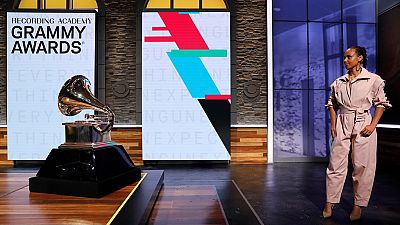 The awards, which will be handed out on January 26 next year, in Los Angeles, in a ceremony hosted by Alicia Keys. They are considered the highest honors in the music industry.

Trevor Noah, who hosts American popular satire show, the Daily Show was nominated in the Best Comedy Album category, for his work on ‘Son of Patricia’.

Burna Boy’s ‘African Giant’ album on the other hand was nominated for the award of ‘Best World Music Album’, alongside Anglelique Kidjo’s ‘Celia’. Kidjo is a three-time Grammy winner.

Nipsey Hussle, who was shot dead earlier this year at age 33, received three posthumous nominations. The much-loved rapper celebrated in Eritrea, Ethiopia and across the African continent lost the 2019 prize for Best Rap Album to Cardi B.

Nigerian artist Mr. Eazi is nominated for his work on J Balvin and Bad Bunny’s Oasis while he is also jointly nominated along with Wizkid, Tiwa Savage, Yemi Alade and Shatta Wale for their work on Beyoncé‘s The Lion King: The Gift album.

So thrilled to receive a #GRAMMYs nomination! This past year has been such a meaningful, exhilarating ride. I’ve loved hearing your stories and continuing down the road of becoming together. Thank you for every ounce of love and support you’ve shared so generously. #IAmBecoming pic.twitter.com/mvBb4W4od6

African Giant is Grammy Nominated!
Its been a crazy day so Grateful
Special S/o to everyone on the album from the producers to co producers to featured Artists to Engineers.
I appreciate all your input to making the album. We should all be very proud#grammys #GRAMMYNoms pic.twitter.com/b0XGlOUbok

WOW legendurybeatz just called to tell me I got 2 Grammy Nominations!!! He got 1 so na 2-1 I win am!!! Haha pic.twitter.com/xwIHNWBT25