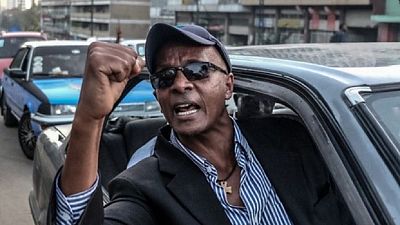 Eskinder Nega, an award-winning Ethiopian journalist and political activist says politically active young men in the country’s largest and most populous region, Oromia, are a threat to the country’s stability.

Publisher of the Ethiopis newspaper is currently in Washington DC to hold an engagement. He has dubbed his address as a report from the frontline with a promise to expose the activities of Oromo youth known as Qeerroo.

He suggested that the activities of Qeerroo were dangerous to the extent that there was the need for the international community to speak up on the looming threat.

Nega in a Twitter post last week compared the Qeerroo to interahamwe, the rampaging youth wing of Rwanda’s erstwhile ruling party. They were said to have played a key role in the 1994 genocide in the East African country.

Now leading a political movement, Nega has repeatedly taken a swipe at the Qeerroo movement which is allied with a leading Oromo activist, media mogul and now politician, Jawar Mohammed.

A March 2018 UK Guardian piece on the political impact of Qeerroos in bringing Prime Minister Abiy Ahmed to power explained the term as follows: “In traditional Oromo culture the term denotes a young bachelor.

“But today it has broader connotations, symbolising both the Oromo movement – a struggle for more political freedom and for greater ethnic representation in federal structures – and an entire generation of newly assertive Ethiopian youth.”

In the lead up to the resignation of Hailemariam Desalegn and the election of Abiy as PM, the group were seen as drivers of anti-government actions across Oromia, from activation of social shutdowns through to rallying protesters.

The impact of Jawar Mohammed – characterized now as a former ally turned foe of PM Abiy – on the young activists is profound as most people see him as their leader.

On social media, sentiments have also risen over the role of Qeerroo in ethnically-tinged unrest that has recently rocked the Oromia region. People have routinely called on the authorities to crackdown on the activities of the group.