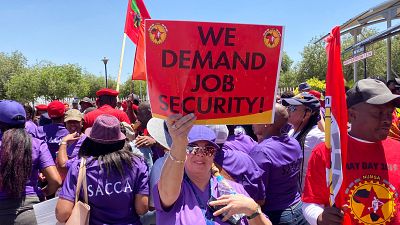 South African Airways (SAA) began negotiations with the unions on Saturday, the second day of a strike by flight and technical personnel.

According to the unions, more than 3,000 of the company’s 5,000 employees, both ground and cabin workers, are participating in the strike.

The workers are demanding wage increases and the end of a restructuring plan that could lead to the loss of hundreds of jobs.

On Friday and Saturday, SAA cancelled more than 300 flights on both domestic and international routes.

The company announced on Saturday that the unions had agreed to sit at the bargaining table.

“It is in the public interest that this dispute be resolved,” SAA Human Resources Manager Martin Kemp said Saturday in a statement welcoming “the unions’ willingness to find a solution.

“We are focused on finding a solution that meets employee demands, saves the company and restores normal operations,” he added.

SAA unions are calling for an 8% wage increase and a three-year employment guarantee, while the company is proposing a 5.9% increase.

South African Airways is one of Africa’s leading airlines with a fleet of more than 50 aircraft. But despite government loans, it has not made any profit since 2011 and is accumulating debts.

South African Airways has warned that a continuation of the strike could be fatal to it. Its spokesman Tlali Tlali said, the company is losing 52 million rand (about €3.2 million) a day due to flight cancellations.

The airline has offered passengers whose flights are cancelled the opportunity to check in on other flights or with affiliated airlines.

It plans to resume international flights on Sunday and domestic flights on Tuesday.