Why Ethiopia's Addis Ababa now has a 'Washington DC roundabout' 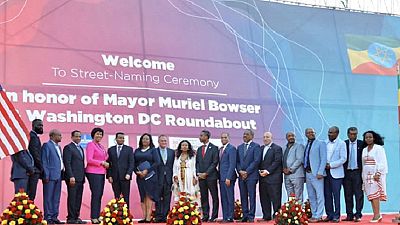 Names of places are gotten for different reasons – be they concrete or abstract. Real or imaginary, historic or current even for happy or sombre reasons.

Same is the case all over the world for especially for public monuments, neighbourhoods, parks, streets, highways et cetera. In the case of this piece, the name of a roundabout and a road in the Ethiopian capital.

Addis Ababa earlier this week got a new roundabout and an adjoining road, both landmarks littered with American spice if you want.

“The Washington DC roundabout” in the heart of Addis is the first roundabout connecting the Africa Avenue Road and African Union building, but that road is also now officially referred to as “Mayor Muriel Bowser Street.”

The decision by the Addis Ababa City Administration to rename the two landmarks is part of efforts aimed at cementing sister-city arrangements with the United States capital.

The new road is named after the current DC Mayor who is currently visiting Ethiopia in a reciprocal visit by her counterpart, Takele Uma-Banti in May 2019.

The two mayors signed a new Sister City Agreement in the presence of Ethiopia’s ambassador to the United States, Fitsum Aregaa and the US ambassador to Ethiopia.

Mayor Muriel also met with president Sahle-Work Zewde, she visited two orphanages and also made a trip to the rock hewn churches of Lalibela in northern Ethiopia. She is also expected to meet Prime Minister Abiy Ahmed Ali before the end of her trip.

“We discussed ways to strengthen Addis-DC #SisterCity agreement. We also explored new partnerships to advance the mutual benefits of our respective cities. I look forward to welcoming Mayor Bowser to Addis Ababa later this year,” Takele wrote on Twitter back in May.

“Addis Ababa and Washington, DC share so much in common. They are both national and diplomatic capitals. They host foreign embassies and multilateral organizations. We can learn a lot from each other on issues ranging from tourism, metropolitan planning and transport management,” he added.

What is a sister-city arrangement?

Sister cities or twin towns are a form of legal or social agreement between towns, cities, counties, oblasts, prefectures, provinces, regions, states, and even countries in geographically and politically distinct areas to promote cultural and commercial ties.

The Addis – DC agreement of six years back was signed by the respective mayors at the time: Addis Ababa’s Diriba Kuma and District of Columbia’s Vincent C. Gray. The original agreement was to last for five years subject to renewal.

The pact cuts across spheres such as, the cultural, economic development, public health, governance and sustainability. Other African cities aligned with DC are Accra (since 2006), Pretoria (since 2002, renewed in 2008, 2011) and Dakar (since 1980, renewed in 2006).