Uganda slams reckless killing of its nationals by Rwandan officials 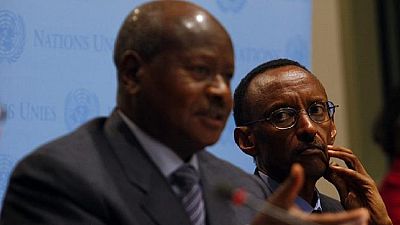 Uganda on Tuesday protested to Rwanda over the killing of two of its nationals by Rwandan security personnel and demanded that they be punished in a further sign of fraying relations between the neighbouring states.

The two Ugandans were shot dead early on Sunday after being intercepted by Rwandan police while smuggling goods over the nearby border with Uganda, a Rwandan police statement said.

In a statement, the Ugandan government accused Rwanda’s security personnel of reckless behaviour.

A Rwandan government statement on Sunday said the two Ugandans had entered Rwanda illegally on a smuggling run and assaulted its police officers.

Relations between Uganda and Rwanda turned frosty early this year after Rwanda shut its border, accusing Kampala of backing rebels trying to topple President Paul Kagame. Rwanda ordered its nationals not to travel to Uganda and barred imports of Ugandan goods.

In August Kagame and Ugandan President Yoweri Museveni signed a deal to try to mend ties, vowing to respect each other’s sovereignty and refrain from actions that destabilize the other’s territory.

But little has changed since and instead shooting incidents associated with smuggling have been increasing.

Analysts fear an escalation of tensions between both countries could push them to resume proxy wars in the jungles of eastern Congo, further destabilising an already volatile region.