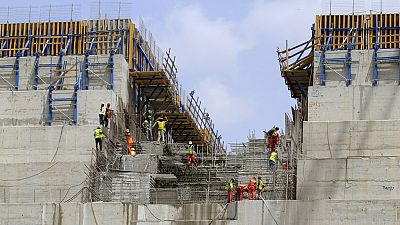 The United States is set to host Egypt, Sudan and Ethiopia on November 6, with a view of resolving a dispute over the latter’s hydropower dam the Blue Nile, Egypt’s foreign minister said on Tuesday.

Earlier this month, Cairo said it accepted a U.S. invitation to a meeting of foreign ministers over the project that is the source of an escalating spat between the two African countries.

It was not clear if the other two countries had agreed to attend.

The role of the United States

Sameh Shoukry noted Tuesday that US officials would be present at the talks acting as “intermediaries that can draw divergent viewpoints closer together…to bring about a fair and just agreement”.

“The U.S. administration invited the three countries to meet in the United States on Nov. 6 in the presence of representatives of the American administration to discuss breaking the deadlock in the ongoing negotiations,” Shoukry told a news conference with visiting German foreign minister Heiko Maas.

A US official said earlier this month that President Abdel Fattah al-Sisi had asked US President Donald Trump to get involved in the dispute when they met in September on the sidelines of the UN General Assembly.

Trump agreed to reach out to Ethiopia and offered the “good offices” of Treasury Secretary Steven Mnuchin to mediate, the official said on condition of anonymity.

Egypt is worried that the Grand Ethiopian Renaissance Dam (GERD), under construction near Ethiopia’s border with Sudan, will restrict supplies of already scarce Nile waters on which it is almost entirely dependent.

In recent weeks, Egypt has called for an external mediator on the issue, saying three-way talks have been exhausted.

Addis Ababa has previously rejected the idea, accusing Egypt of trying to sidestep the process.

Abiy, who won this year’s Nobel Peace Prize for his efforts to heal tensions with neighbouring Eritrea, emphasised however that negotiations would be the best way to resolve the issue.

Ethiopia and Egypt’s leaders met on the sidelines of Russia’s Africa summit on Thursday to discuss a contentious dam project on the River Nile, a diplomat said.

Russia, which was hosting an Africa Summit in its Black Sea resort of Sochi in an attempt to revive its Soviet-era influence on the continent, has said it is ready to play a role in resolving the conflict.

While in Russia, the leaders of Ethiopia and Egypt agreed to the immediate resumption of the work by a technical committee trying to agree on the operating terms of the Dam, an Egyptian presidency spokesman said.

There was no mention of a mediator in the statement.

The Nile is a lifeline supplying both water and electricity to the 10 countries it traverses.

Its main tributaries, the White and Blue Niles, converge in Sudanese capital Khartoum before flowing north through Egypt to drain into the Mediterranean Sea.

Analysts fear the three Nile basin countries could be drawn into a conflict if the dispute is not resolved before the dam begins operating.

Ethiopia is expected to start filling the reservoir behind the dam next year.