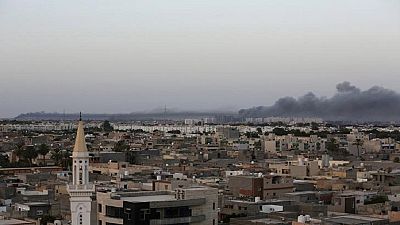 Located 200 kilometers east of the capital Tripoli, Misrata Airport is in the area controlled by the GNA.

It has been, for over a month, the only functioning airport in western Libya since the closure in early September of Mitiga Tripoli, target of repeated attacks. All flights had been transferred to Misrata.

Two planes parked on the tarmac have been affected" resulting in "suspension of flights for a few hours, time to check the safety of aircraft and facilities.

“The Emirati UAVs that support the war criminal Haftar have targeted the Misrata International Airport,” pro-GNA forces said on their Facebook page. An employee was slightly injured and hospitalized and facilities were damaged.

Photos released on Saturday show impacts on the back of a commercial aircraft.

“Two planes parked on the tarmac have been affected” resulting in “suspension of flights for a few hours, time to check the safety of aircraft and facilities,” said a source of the municipality of Misrata, under cover anonymity.

The pro-Haftar forces did not react to these accusations. The raid was not claimed. Misrata airport has already been targeted by proHaftar raids.

Since the beginning of April 4, an offensive by the forces of Marshal Haftar, the strong man of eastern Libya, seeking to take Tripoli, seat of the UN recognized by the UN, the front lines have moved little.

In the face of the status quo, the rival camps turned to more sophisticated weapons, hoping to gain the upper hand in this battle that has already killed more than 1,000 people and forced 120,000 people from their homes according to the UN.

UAVs came into play in June, despite an arms embargo imposed by the UN on Libya since the 2011 uprising that overthrew Muammar Gaddafi’s regime.