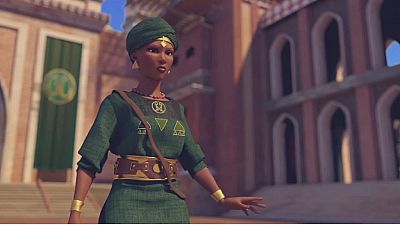 The long-awaited 3D animated cartoon; Malika was recently screened in Lagos, Nigeria at the 9th comic con. Malika, which is inspired by the warrior, Queen Amina of Northern Nigeria won wars while leading her people.

Like other super hero cartoons, Nigerians had desired that stories from history be made into cartoons and films to showcase stories to the world and for children to easily learn about Africa.

The screening of the cartoon was the first of its kind in the animation industry.

Its inspires by Queen Amina of Zariaso I was able to take a lot of element from her story but Malik is her own individual characters and there are different things.

“Its inspires by Queen Amina of Zariaso I was able to take a lot of element from her story but Malik is her own individual characters and there are different things.She is a fictional character. There is not real African Queen that was called Malik. So that gave us a lot more freedom to be able to go in and create this character that you know we feel like the world needed to see but at the same time its not ignoring the root of African history, African culture and its not ignoring what a real African Queen looks like back then,” said Roye Okupe, writer and director of the project.

The comic con was organized to bring arist and lovers of comic together while motivating them to do new things in the industry.

Based on the concept, it was mad and it was interesting. I wasn’t really expecting that from a Nigerian as a whole; expecting them to put something like that and using our tradition in creating comics, making it blend and making it feel like wow! This is lovely, this is nice,” said Sarah, creative art student.

“Its a great start, I say a jumpstart towards what we could be achieving. It was really nice. I see a lot of potential for Malika to be bigger. It was really, really amazing,” said Edna, a web comic content creator.

This yearly pop culture event started in 2012 and have come a long way forming partnership with companies.