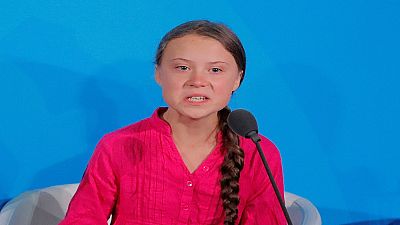 Greta Thunberg and other youth climate activists filed an official complaint on Monday under the Convention on the Rights of the Child, calling for leaders to protect children from the perils of climate change.

“The world signed a contract between generations that the present world would leave a world worth inheriting to the future. And today, I want to tell the world you, you are defaulting on that contract and we’re here to collect,” said U.S. teen climate activist Alexandria Villasenor.

“They promised to protect our rights and they have not done that,” said Thunberg.

Days after millions of young people took to the streets worldwide to demand emergency action on climate change, leaders gathered at the United Nations on Monday to try to inject fresh momentum into stalling efforts to curb carbon emissions.

After her speech, Thunberg happened to be in the lobby of the United Nations as President Donald Trump arrived — and news cameras from around the world captured the instantly memeworthy expression on her face as he walked by.

Trump was only at the climate summit for about 14 minutes, according to the White House pool report, and did not make any formal statement. Trump has questioned his own government’s climate scientists, vowed to withdraw the US from the main global climate agreement, the Paris climate accord, and his administration has rolled back dozens of climate rules and initiatives.

International donors agreed on Monday to free up more than $500 million in aid to protect tropical rainforests, including the Amazon where wildfires are raging, France’s president said on Monday (September 23) at a U.N. meeting shunned by Brazil.

The Brazilian Amazon is facing its worst spate of forest fires since 2010, prompting a global outcry and worries that destruction of parts of the world’s largest rainforest could hurt demand for Brazil’s exports.

Leaders of the Group of Seven wealthy nations in August offered $20 million of emergency aid to help fight Amazon fires, a gesture Brazil at the time criticized as colonialist.

French President Emmanuel Macron had called for a wider alliance to protect rainforests worldwide using the United Nations General Assembly as a platform to garner support.

France, Chile and Colombia met on the sidelines of the annual gathering of world leaders on Monday, despite the absence of Brazilian President Jair Bolsonaro, a climate change skeptic who is promoting development in the Amazon region.

“Everybody thinks ‘How are you going to do this without Brazil?’” Macron said during a speech. “Brazil is welcome and I think everyone wants to work with Brazil (…) It will come, it takes a very inclusive approach.”

Macron hit back at Bolsonaro’s accusations that Paris had no role to play, saying that French Guiana, a French overseas territory in South America, shared a more than 700-kilometer border with Brazil, making it a player in protecting rainforests.

France would contribute $100 million out of $500 million in the package, Macron said. Germany, Britain and the European Union were also among the contributors to investments in biodiversity preservation and lasting development.