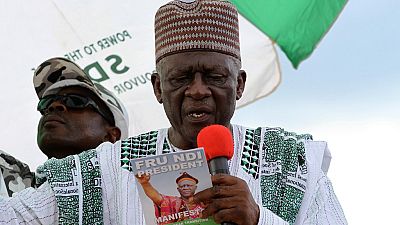 <p><strong>Cameroon’s opposition and leaders of the Anglophone separatist movement have reacted to president Paul Biya’s call for national dialogue to resolve the crisis in the Northwest and Southwest regions.</strong></p> <p>Biya on Tuesday announced that he intends to open a major “national dialogue” later this month in a bid to solve the conflict between security forces and armed separatists from the anglophone minority in the west.</p> <h2 style="font-size:16px;">Separatist leader dismisses dialogue call</h2> <p>The leader of the separatist movement, Ayuk Tabe dismissed Biya’s call as a ‘non-starter’.</p> <p>“The speech was a non-event and a non-starter,” separatist leader Julius Sisiku Ayuk Tabe said in a message relayed by his lawyers.</p> <p>In August Ayuk Tabe was sentenced to life in prison along with nine of his supporters, a move that made the prospect of peace seem even more remote.</p> <p>Ayuk Tabe is the first self-proclaimed president of “Ambazonia”, a breakaway state declared in October 2017 in two English-speaking regions of the central African country.</p> <p>He described Biya’s dialogue initiative as “an awkward and grudging attempt timed to avoid UN sanctions, considering that the UN will be deliberating on the anglophone crisis this September and Mr Biya and his regime has been amply put on notice.”</p> <p>He added that “President Biya unilaterally declared the ongoing war in the Northwest and Southwest regions. He must unilaterally declare an end to the war that he declared.”</p> <h2 style="font-size:16px;">Opposition calls for ‘amnesty before dialogue’</h2> <p>The opposition Social Democratic Front (<span class="caps">SDF</span>), on Friday called for a “general amnesty” for detainees linked to the separatist crisis and a “ceasefire” before participating in the “grand national dialogue” proposed by Biya.</p> <p>During a meeting with the prime minister who is leading the dialogue, the party transmitted “preliminary conditions for (its) participation in this long-awaited inclusive national dialogue”.</p> <p>“We have unequivocally noted that the announced inclusive national dialogue cannot effectively prosper without a calm environment: the declaration of a ceasefire and the guarantee of a general amnesty for all those involved at any level in the English-speaking crisis,” the statement states.</p> <p>At midday, however, <span class="caps">SDF</span> Vice-President Joshua Osih qualified this text in an interview with <span class="caps">AFP</span>: “These are proposals, we should not try to qualify them, but it seems obvious to us that this is justified”, he explained, adding: “we have talked about our vision of dialogue, it is up to them to react unless they want a monologue”.</p> <h2 style="font-size:16px;">The Anglophone crisis</h2> <p>Since November 2016, when the government violently cracked down on peaceful protests by teachers and lawyers in the Anglophone regions, the francophone-majority country has been mired in the unrest.</p> <p>More than 2,000 people have been killed while over 500,000 have been displaced as the English-speaking separatists demand independence in the Northwest and Southwest regions.</p> <p>The UN has said that its Secretary General Antonio Guterres “welcomes the announcement” by Biya and “reiterates the readiness of the United Nations to support the dialogue process.”</p> <p>But many commentators said that if Biya’s overture is genuine, it will have little chance of headway as long as separatist leaders remain behind bars or in exile.</p> <p><strong><em>Agencies</em></strong></p>

The speech was a non-event and a non-starter.