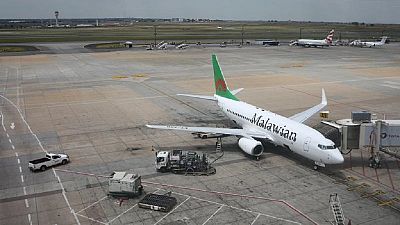 A pilot flew into South Africa’s busiest airport, the Oliver Tambo International Airport, in the commercial capital Johannesburg on Monday in what has been described by local news portals as an “unannounced landing.”

The reports say that the pilot of the light aircraft had flown into the airport at a time when other bigger aircrafts were taxiing for takeoff.

The pilot apparently said he was dropping off a friend who needed to catch a flight, the local eNCA news channel said.

Industry experts who spoke to eNCA berated the situation and said more needed to be done to prevent such gross infringements.

“Aviation space is very critical. You have the defence who’s got to protect our space. If it was in another country, they would have sent the air force to remove them,” one expert said.

Authorities have reportedly confirmed the incident whose video clip has gone viral on social media. It has been met with mixed reactions mostly of outrage over the misuse of a national facility as crucial as the airport.

Details of who the pilot was and of the said aircraft remain sketchy but an investigation is expected to unravel the whether or not the pilot had adhered to standards.

Watch the eNCA report on the story