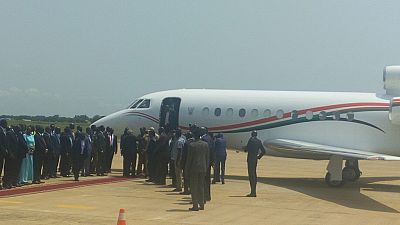 This is a second time the opposition leader Machar is returning to Juba since he inked the revitalized peace deal with President Kiir in 2018. Machar was in Juba in October last year for celebrations to mark the signing of the deal.

He is meeting President Salva Kiir to discuss all the outstanding issues of the peace agreement and the way forward.

Machar, left Juba in 2016 after a renewed fighting, forced him into exile and resulted to the collapse of 2015 compromise peace agreement.

With latest deal, Machar returned as the first vice president to Kiir, a position, he held before the conflict broke late 2013.

The two rivals last met at the Vatican, Italy on the invitation of Pope Francis, the head of the Roman Catholic Church, in April this year.

South Sudan descended into war in mid-December 2013, when Kiir accused his former deputy-turned rebel leader for plotting a coup.

In September 2018, the rival factions involved in the conflict signed a peace deal to end the conflict that has killed tens of thousands of people and displaced over 2 million people in the country.

The power-sharing arrangements under the peace deal were supposed to take effect in May, but the process was delayed by six months until November as both sides disagreed over the terms and security agreement.

Machar was accompanied by the deputy head of Sudan sovereignty council Mohammed Dogala.