The Pope arrived in Mauritius on Monday for the last leg of his African tour that has already taken him to Mozambique and Madagascar.

The pope is scheduled to say Mass and meet with civil authorities and civil society at the presidential palace.

Thousands of people gathered in front of the monument “Mary Queen of Peace”, where Francis is to celebrate a mass, shouted with joy as Francis landed at the island’s international airport.

I hope his visit will bring us effective and long lasting peace.

“For us, it is very important to meet the Pope,” said Geneviève, a 47-year-old Mauritian woman who came with her family and friends. “It’s an opportunity, it’s a joy.”

“More than 3,500 of us came from Reunion Island,” Josette explained, wearing a straw hat on our heads, saying she was not angry with François for choosing to visit Mauritius and Madagascar, two other islands in the Indian Ocean. “It doesn’t matter, you come here when you have faith, you don’t choose.”

Mauritius, a small republic of 1.3 million inhabitants is predominantly Hindu (52%), but has 30% Christians, mainly Catholics, and 18% Muslims.

Mauritian Prime Minister Pravind Kumar Jugnauth already sees the visit as a showcase for Mauritius’ “economic and social success, but also as a true model of pluralism”.

“Our cultural diversity has never prevented us from creating an environment conducive to dialogue, understanding and peace,” he said.

On Monday, François will make his return trip to Mauritius from Antananarivo, the capital of Madagascar, before returning to Rome the next day.

Pope’s message to the Malagasy

Pope Francis called on the Malagasy people to protect the environment, even as he reiterated his warning against corruption.

The Argentine pontiff told his hosts they should “create jobs and money-making activities which respect the environment and help people escape poverty”.

Madagascar’s British ambassador Philip Boyle told AFP the country loses around 200,000 hectares of forest each year, adding that “most of the tropical rainforest could disappear by 2040”.

The pope said there “were many causes driving excessive deforestation which benefits just a few people… and compromises the future of the country.”

The pope also had words of encouragement for the youth of Madagascar, most of whom are unemployed.

Liberal-leaning president Andry Rajoelina was elected to a second term last year mainly on promises of jobs and housing.

At Antananarivo’s Soamandrakizay stadium, thousands of young people – mainly scouts – gathered for a vigil. They waited for hours in the heat.

“I am here to ask for the pope’s blessing to face the harsh realities of life, insecurity, poverty and corruption,” said 17-year old student Njara Raherimana, who travelled hundreds of kilometres for the event.
“All this gives me hope for change in my country,” echoed fellow student, Antony Christian Tovonalintsoa, who lives in the outskirts of the capital.

During the vigil, Pope Francis lauded the “joy and enthusiasm” of the singing crowd.

He encouraged the youth not to fall into “bitterness” or to lose hope, even when they lacked the “necessary minimum” to get by and when “educational opportunities were insufficient”

The pope arrived in Madagascar on Friday evening, for the second leg of his tour.

A short video of the children who welcomed Pope Francis in Madagascar.
Am extremely beautiful country, Madagascar is also extremely poor, with a GDP per capita of $1,600 a year. pic.twitter.com/ssBHs22CT9

His trip here is anticipated by many, including conservationists who hope the environmentally-conscious spiritual leader will spotlight the island that lost 2% of primary rainforest last year, the highest of any tropical nation according to the World Resources Institute.

“He should say that this forest is God’s creation. He gave it to us and for our own benefit,” said Anselme Toto Volahy, researcher from Durrell Wildlife Conservation Trust.

“If we don’t manage it well, we will destroy ourselves.”

On his final day in Mozambique, Pope Francis on Friday scolded political and business leaders in the resource-rich but poor East African country who allow themselves to be corrupted by outsiders.

“Mozambique is a land of abundant natural and cultural riches, yet paradoxically, great numbers of its people live below the poverty level,” Francis said in the stadium, in an area of the capital where many people live in shantytowns with houses of corrugated metal roofs.

The pope visited a hospital for HIV-AIDS sufferers run by the Sant’ Egidio community and then said a mass for some 60,000 of people in Maputo’s national stadium.

“At times it seems that those who approach with the alleged desire to help have other interests. Sadly, this happens with brothers and sisters of the same land, who let themselves be corrupted. It is very dangerous to think that this is the price to be paid for foreign aid,” Francis said.

While the pope did not give any specific examples of corruption, Mozambique is still struggling to recover from the impact of a $2 billion debt scandal, which saw hundreds of millions of dollars in borrowing guaranteed by the Mozambique government disappear.

“We cannot think of the future and build a nation” with violence, the pope said in a homily to a crowd of about 60,000 at the Zimpeto stadium in the Mozambican capital Maputo.

Speaking in Portuguese, he asked them not to follow the old law of retaliation “an eye for eye, a tooth for a tooth.

“No family, no group of neighbours or ethnic group and even less no country has a future if the motor that unites them… is composed of vengeance and hatred,” he said.

On his first full day in Mozambique, Pope Francis applauded a recently signed peace deal between government and rebels.

The pontiff’s visit comes after the government and the former rebel group Renamo, now the main opposition party, signed a historic treaty.

The two sides in the former Portuguese colony fought a 15-year civil war that ended in 1992 and killed about a million people. But only last month did they sign a permanent ceasefire.

In talks with President Filipe Nyusi, the pope expressed his “personal gratitude… for the efforts made in recent decades to ensure that peace is once more the norm.”

Reconciliation, he said, is “the best path to confront the difficulties and challenges that you face as a nation.”

He described the accord as “a landmark that we greet with the hope that it will prove decisive.”

The talks at the presidential palace were also attended by Renamo opposition leader Ossufo Momade.

The pope also commiserated with victims of the two cyclones that killed more than 600 and affected hundreds of thousands.

“I would like my first words of closeness and solidarity to be addressed to all those struck by cyclones Idai and Kenneth, whose devastating effects continue to be felt by so many families,” he said.

“I want you to know of my own participation in your anguish and suffering, and the commitment of the Catholic community to respond to this most difficult situation.

“Amid the catastrophe and desolation, I pray that, in God´s providence, constant concern will be shown by all those civil and social groups who make people their priority and are in a position to promote the necessary rebuilding”.

The pope asked Mozambicans to be vigilant against pillaging and unethical exploitation of natural resources “driven by a greed generally not cultivated even by the inhabitants of these lands, nor motivated by the common good of your people”.

Thousands of jubilant Catholic faithful on Wednesday welcomed Pope Francis to Mozambique as he kicked off a three-nation tour of African countries, expected to focus on those hard hit by poverty, conflict and natural disaster.*

Touching down just after 6:00 pm local time (1600 GMT) Francis was greeted on the tarmac by President Filipe Nyusi, a military band playing the national anthem and a display of traditional dance.

The first pope to visit Mozambique since John Paul II in 1988, he was then whisked away in his popemobile, flanked by police bikes as crowds waved signs reading ‘welcome to Mozambique Prophet of reconciliation” and danced in celebration.

He stood in his popemobile and waved at the thousands of faithfuls who lined up along the fringes of the city’ main streets as he made the five kilometre (three mile) route from the airport to the Nuncio’s residence in the posh Sommerschield suburb, where he will stay during the visit. 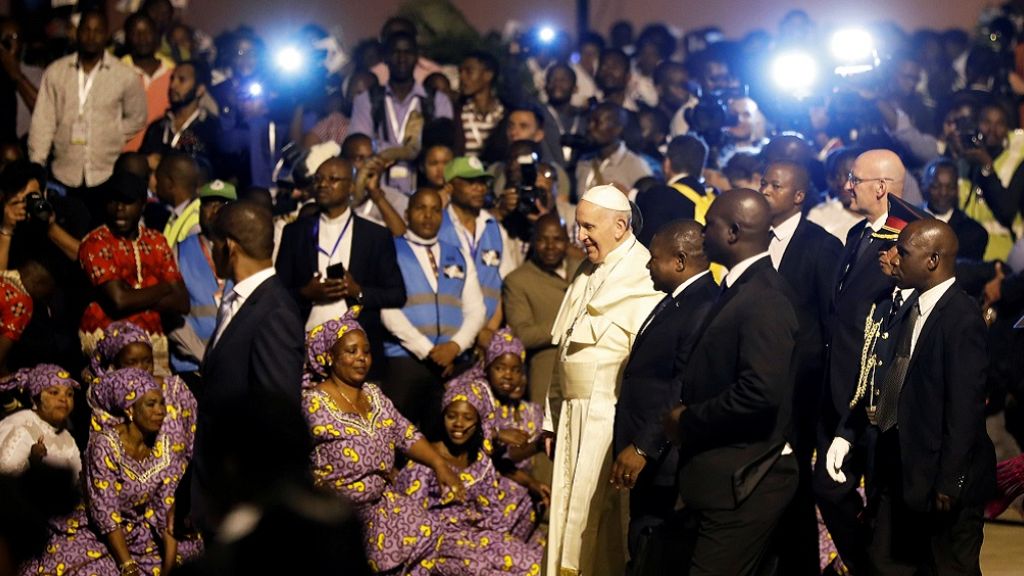 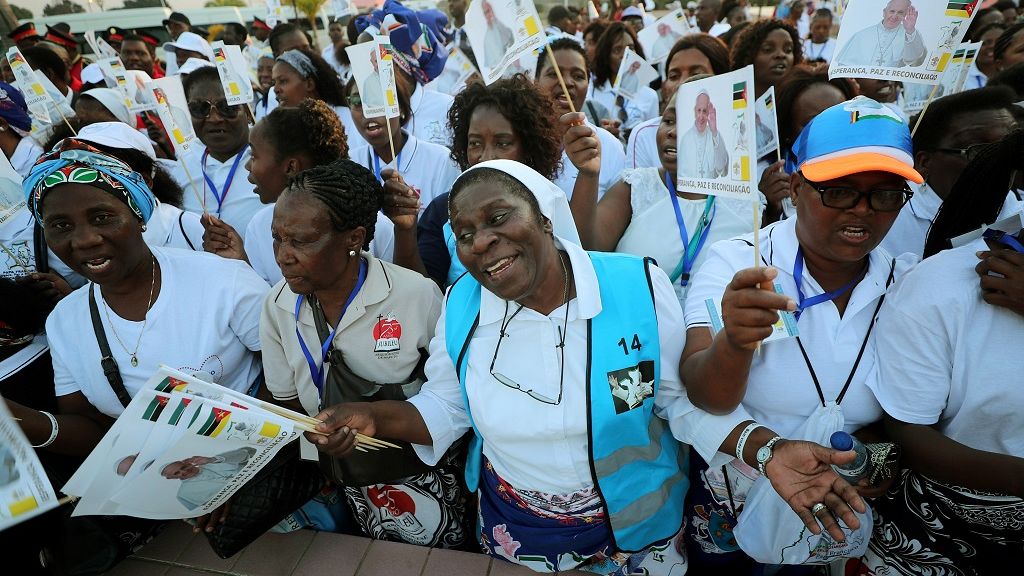 On Friday he will address a mass at the giant Zimpeto stadium in the seaside capital Maputo.

The pope is expected to discuss the country’s fragile peace process, the devastation caused by two back-to-back cyclones early this year, and the upcoming general election.

The three-day visit to Mozambique comes a month after the government signed a historic peace treaty with the former rebel group Renamo, which is now the main opposition party.

The pope may also address the issue of extremism in northern Mozambique where jihadist attacks have claimed more than 300 lives over two years.

“I hope his visit will bring us effective and long lasting peace,” said Arnaldo Menezes, a 25-year-old student, referring to the treaty with Renamo.

“We don’t want war anymore. I want to be able to travel freely across the country, even in the north,” he said.

With elections scheduled for October, some fear violence may break out.

“He is coming at a time when we Mozambicans are trying to consolidate peace,” said Manuela Muianga, a biologist and disaster relief manager in the capital, Maputo.

“We Catholics feel that he is a visionary man who can help Mozambique to strengthen hope and make us forget all those things that make us fight against each other. The biggest concern is the fighting between the two parties. I’m sure he will address this,” she said.

The pontiff will only have time to visit Maputo while in Mozambique, much to the disappointment of those in the central city of Beira where Cyclone Idai killed at least 600 people and left hundreds of thousands homeless in March.

“Although I am unable to go beyond the capital, my heart reaches out to all of you, with a special place for those of you who live in difficult situations,” he said in a video message, adding: “You are all in my prayers.”

The capital has been spruced up for the visit, with the government spending 300,000 euros ($330,000) for the trip, according to Foreign Minister Jose Pacheco, including repairs to Maputo’s cathedral and city roads.

Many locals appear happy to splurge on pope-branded regalia.

Twenty-nine-year-old Catarina Simbine showed off a Pope-branded cloth known as a capulana.

“Me and my fellow congregants from Santa Theresa de Calcutta took about six months preparing for his arrival,” she told AFP.

Beatrice Netu, 70, remembered welcoming the pope on his first visit to Mozambique as “one of the biggest privileges of my life”.

“I would not be able to handle it if the Pope came up to us and greeted us or touched my hand here where I am standing in the crowd, I would probably faint!”

The pope will also visit the large Indian Ocean island of Madagascar and its much smaller and wealthier neighbour Mauritius — both situated off the eastern coast of Africa.

Mozambique and Madagascar are among the world’s poorest countries and Francis’ decision to visit is seen by commentators as an act of solidarity from a cleric who was a frequent presence in the shantytowns of Argentina and is now called the “pope of the poor”.