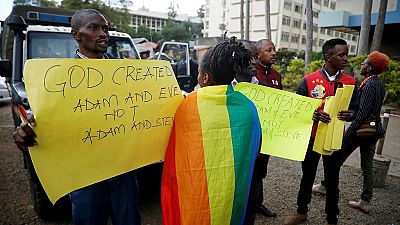 A group affiliated with Ethiopia’s Orthodox Church is condemning what it calls the government’s silence on homosexuality in the country.

Speaking at a conference Sunday in Addis Ababa, the capital, Dereje Negash of the Orthodox Church group dedicated to an Ethiopian saint, said the government’s indifference on the issue is helping the LGBT movement in the East African country.

“We are witnessing foreign elements that are trying to spread homosexuality in Ethiopia using aid, politics and technology. To this end, they are spending millions of dollars,” Dereje said in his presentation to hundreds of people inside a conference hall.

People of same sexes are secretly marrying here in Ethiopia. This should stop, and stop now.

“People of same sexes are secretly marrying here in Ethiopia. This should stop, and stop now.” He urged authorities to enact strong laws against same-sex relations.

An event planned in 2014 to publicly denounce the LGBT community in Ethiopia was cancelled at the last minute for unknown reasons. Organizers of that event told The Associated Press at the time they feared aid groups and the international community influenced government officials.

A local LGBT activist, who spoke on condition of anonymity told AP he fears for his safety, citing widespread misconceptions such as the belief that gays are rapists.

Ethiopia has a deeply religious society, with Christianity and Islam having many followers. Under Ethiopian law, homosexual acts are punishable with jail terms of up to 15 years.

Same-sex relations are criminalized in many countries in sub-Saharan Africa, where many regard homosexuality as imported from the West.