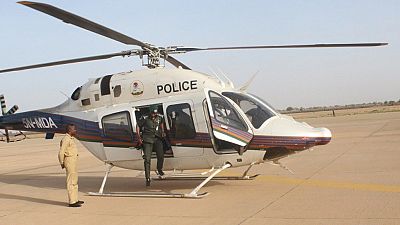 The Nigerian police force on Thursday announced that helicopters had been deployed to help deal with a rising spate of insecurity across the country.

Arrangements have been made for all geographical zones of the country according to an order from the police chief, M. A. Adamu. He also tasked citizens to remain calm and not panic from the new arrangement.

Nigeria has a multi-level security challenge which has seen the army deployed to fight terrorism and cattle rustling in the north east and north west respectively.

There has also been rise in cases of kidnappings. The most recent being after an attack on a highway linking the capital Abuja to the north central Kaduna State.

As part of efforts aimed at effectively curtailing crimes in the country, the Inspector-General of Police, IGP M.A Adamu, NPM, mni has ordered the deployment of Police aerial surveillance helicopters to major cities in the South-West and North-West of the country.

While the Police Air-Wing Operational Base in Abuja caters for Abuja – Kaduna highways as well as the adjoining States in the North-West and North-Central, the new base in Ondo State will cater for the adjoining states and highways straddling the South-West.

The Force therefore enjoins citizens not to panic but to go about their lawful businesses as the aerial surveillance is geared towards improving the security of lives and property in the affected areas.