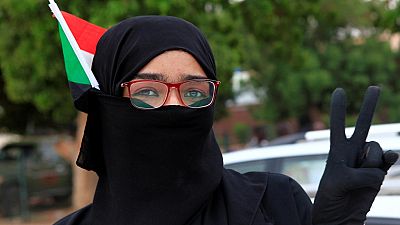 When the Janjaweed militia attacked a sit-in protest and killed over a hundred protesters on June 3, the significant art on the walls of the yard was not spared destruction.

Now artists are working to restore the revolutionary art and graffiti. Other protesters who are pushing for a change of the current political system join in the rehabilitation exercise. They recite the Quran to commemorate their deceased compatriots.

For Omar Kanan, the exercise is “not just for the love of painting but to keep a record of our history.”

“By this, we want to immortalize the people who were killed here during the massacre on June 3rd,” he added.

Anda Kamal revisited the yard to remember her colleagues who did not make it out alive.

“This place is quite meaningful for everyone who was here at the sit-in. It is right next to the Blue Nile bridge, the metal bridge. And it has all graphics of the views and the sights from the sit-in itself and picture behind me of the people who passed-away from December and even during the sit-in.”

Kamal believes that the revolution has been successful even though a lot of souls have been lost. She acknowledges that a lot more still needs to be done.
“We are strong, we need to fight and we are going to fight until the end,” she said.

For Ezelden Bushara, another protester, the real revolution is yet to start.

“I am here today to start a new and real revolution with the new government. I want to say that start a real revolution means to change situation by changing constitution. I mean to struggle for new education, health, human rights to build and establish a country of law,” he said.

A transitional council led by new Prime Minister Abdallah Hamdok was inaugurated on August 21 in a power sharing deal with the military hoped to stablize the country economically and restore democracy. However, there is criticism concerning the marginalization of women in the new leadership.