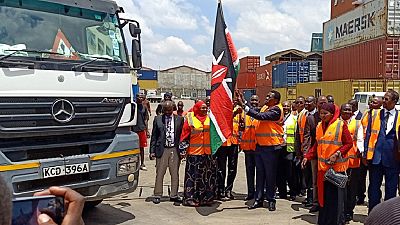 Kenya has received a donation of rice from China to help with government efforts to combat drought in parts of the country.

Cabinet Secretary of the Ministry of Devolution and ASALs, Eugene Wamalwa, disclosed on Wednesday that China had donated 30,000 bags of rice.

“Just received a donation of 30,000 bags Of rice from The People’s Republic of China to compliment Government of Kenya, GOK, relief food distribution,” he said in a tweet.

A number of governors and political leadership from the affected counties were present at the flagging off ceremony. Wamalwa stressed that necessary safety clearance had been undertaken by relevant state authorities.

Impressed by the efficiency and Professionalism shown by our KPA,KEBS,KRA staff in expeditious handling of food urgently required to bring relief to drought affected Kenyans. pic.twitter.com/KMGjBHsMl6

Half of Kenya’s 47 counties are currently battling with drought which has led to rising food insecurity and the need for government intervention.

The Cabinet Secretary noted that 23 counties were affected by the drought. A number of Kenyans are, however, not enthused by the news of donation.

Most of them slammed the government for failing citizens so badly that Kenyans have to depend on food donations. Some are concerned about the quality of the donation whiles others wanted to be sure of the quality and safety of the rice.

“Are you sure if you are not bringing us plastic rice?? Shame on Kenya Leadership!,” one user wrote on Twitter. “Good news, just ensure its inspected by KEBS as your good intention might end up killing poor people..Plastic rice,” another wrote.

Two others said: “With a country capable of feeding herself. It’s a shame. A big one! Nothing to be proud of!”

“A “flag-off” …sigh. Sometimes these people are just misusing that flag.”