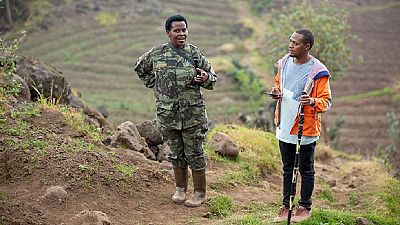 Elisabeth Nyirakaragire is not just the first female vet treating the precious mountain gorillas in Rwanda but she is the first vet to work with the mammals.

For 32 years, Elisabeth has transversed Volcanoes National Park to keep in check the health of the endangered gorillas reports Julius Bizimungu for the The New Times

I am happy to contribute to gorilla conservation and nature in general.

“This exercise is called gorilla health monitoring. We basically conduct routine health checks of the gorillas,” she tells Julius on their journey through the jungle.

Being the first and the oldest veterinarian for mountain gorillas in Rwanda, the 56 year old doctor, is still passionate and determined to spend the next few years taking care of the mountain gorillas.

Nyirakaragire is a proud to have contributed to the survival and the growth of the mountain gorillas, whose status has recently changed from being “critically endangered” to just “endangered” species.

“I am very happy to see the population of the gorillas increasing through our veterinary interventions. I am happy to contribute to gorilla conservation and nature in general,” says the veteran vet who worked through Rwand’s civil unrest in the 1990’s without pay and poaching activities at their highest.