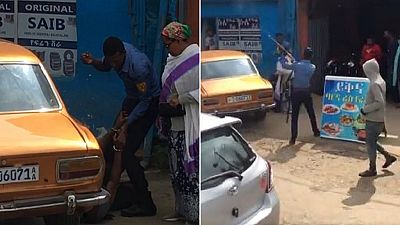 A video clip of a brutal police assault on a man in the Ethiopian capital, Addis Ababa, has drawn widespread condemnation and a call for authorities to deliver justice for the victim.

A Twitter user posted the less than one-minute clip on the platform decrying what he said was his “morning starter.” “…as usual the Police, our men in blue, protecting us…,” he added with emojis of exhaustion.

Two police men are seen in the clip, one assaulting a man in handcuffs and helplessly on the floor. The other officer with a rifle is pacing at the scene of the assault and at a point fires a shot into the air.

Onlookers look on helplessly with the exception of a woman who tries to restrain the police man leading the assault to no avail. At a point the police shoves her aside.

Though authorities have yet to publicly respond to calls for justice, the verdict on social media was that such an action was despicable and unacceptable.

Most people in voicing their outrage tagged the Prime Minister, the Addis Ababa police and the mayor Takele Uma-Banti. Others also tagged the Attorney General, Chief Justice and other influential people.

“Within the past few months I reported 3 deaths occurred by security forces brutality in #Addis Ababa,” Haimanot Ashenafi of Addis Maleda tweeted. “This is disturbing!” journalist Samuel Getachew of The Reporter also remarked.

That video is infuriating &absolutely unacceptable. But please let’s refrain from generalizing about police officers & dehumanizing them. Our advocacy should rooted in the belief that all human being should be treated with dignity whether they committed a crime or not. #ነግበኔ

Policing institutions in Ethiopia are rotten to the core, beyond redemption. What we see in this video is not an isolated act of 2 rogue officers. It is a widespread & deep rooted problem. For it implicates the entire institution, I hope there would be a thorough review. https://t.co/AnELnz4809

This brutal attack by AddisPolice against civilian is filmed today at 9:30 AM by a passer by. This is a manifestation of lack of institutional accountability and lack of commitment to respect of human rights.
CC: TakeleUma PMEthiopia https://t.co/wfTy7J8ncK

BTW, we all should fight and say NO to brutality and all illegal actions like that brave woman in the video. That lady to me is the 21 first century Rosa Parks!!!