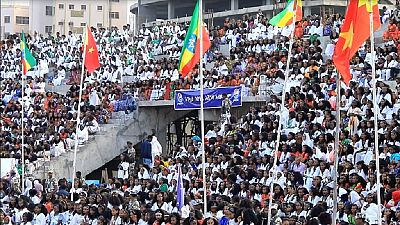 What is Ashenda about?

It is a cultural celebration associated with northern Ethiopia especially to the Tigray and Amhara regional states. It is uniquely female as it is reserved for girls and young women.

It is a yearly event during which the target group engage in different fun activities including drumming, dancing and socialization. It usually takes place between August – September.

Participants are usually adorned in dresses with elaborate embroidery, jewelry and hair styles. It last from a minimum of three days and could also stretch for weeks. Some reports add that it signifies the end of a fasting period known as called filseta.

The most known name of the festival is “Ashenda” which is the name for a tall grass that the girls usually tie around their celebration gowns as a type of decoration.

The main festival every year is held in Mekelle. Other names for the festival include: Shadey, Ashendye, Solel, Mariya etc. Prime Minister Abiy Ahmed also sent his best wishes for all celebrants, state media reported.

President Zewde in Tigray for Ashenda 2019

Speaking in the capital of Tigray regional state Mekelle, the president rallied efforts to ensure that the ceremony attains a cultural heritage status under the United Nations Education, Cultural and Scientific Organization, UNESCO classification.

State-run Fana Broadcasting Corporate quoted her as saying: “… it is the responsibility of all to preserve these heritages from the impact of globalization.

“Just like Meskel, Fichee-Chambalaalla and Gada system, I believe that Ashenda will be registered as an intangible cultural heritage of humanity by UNESCO,” she added stressing the need to increase and consolidate efforts at combating child marriage and gender based violence.