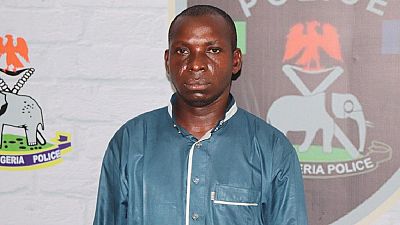 Police in Nigeria have rearrested a notorious kidnapper who was weeks back forcibly released by soldiers from detention.

Alhaji Hamisu Bala Wadume, was arrested on Monday (August 19) by police operatives at his hideout in the north central Kano State.

“It would be recalled that the Police had been on the massive manhunt for the suspect, Alhaji Hamisu Bala Wadume since 6th August, 2019 following the unfortunate incident in Ibi, Taraba State which resulted in the brutal murder of 3 – Police Officers and two (2) civilians, …

“and injury to five (5) others. The suspect, who was appropriately restrained at the time of the incident, was subsequently released by his “rescuers” after they had destroyed the restraining handcuffs,” a police statement read in part.

In a video confession in Hausa, the suspect is heard saying: “I am Hamisu Bala alias Wadume. Police operatives came and arrested me, after my arrest, soldiers pursued them and opened fire till some policemen lost their lives.

“They took me to their army headquarters, cut off my handcuffs and allowed me to escape, since my escape; I have been in hiding till the police rearrested me.”

The police had in early August made public demand for the army to come clean on the whereabouts of the kidnapper and also demanded justice for their slain officers.

After a meeting with security service chiefs, President Buhari ordered an investigation into the circumstances that led to the deadly clashes. The committee has yet to present its results.