Ten Cameroonian separatists have been handed life sentences by a military court sitting in the capital, Yaounde.

The convicts included the leader of the most known separatist group, the Southern Cameroon National Council, SCNC, Sisiku Ayuk Tabe.

They were arrested in January 2018 at a hotel in the Nigerian capital, Abuja, and were subsequently deported to Cameroon. Yaounde had in November 2017 issued international arrest warrants for Tabe and over a dozen others.

On their deportation to Cameroon which decision was sharply criticized by the United Nations refugee agency, they where charged with secession and terrorism among others.

The military court convicted them of various charges, including rebellion, according to reports. Their trial started in December 2018 and was postponed a number of times till today’s final determination.

Human rights groups have routinely chastized the Cameroon government of arraigning civilians before military courts. A case in point being that of RFI journalist Ahmed Abba who was jailed over links with Boko Haram. He was later released on a presidential pardon. 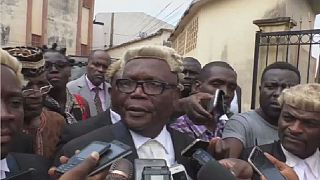