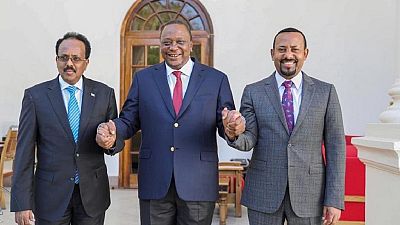 Kismayo airport in southern Somalia refused to allow an Ethiopian plane to land on Monday, a witness said, amid heightened tensions between the federal government and the regional leadership ahead of elections on Thursday.

Somalia’s central government said on Saturday it would not recognise the result of an upcoming vote to elect a president of Jubbaland, a key battleground state for counter-terrorism operations, saying the candidate selection process violated the national constitution.

The Jubbaland election commission has said the vote would go ahead on Thursday. The head of the African Union Mission in Somalia, AMISOM, Ethiopian Tigabu Yilma, is in Kismayo to attempt to mediate in the standoff.

It wanted to land at Kismayo airport but was denied clearance because it did not send information in advance.

Security analysts say the spat has the potential to cause friction between neighbouring Kenya and Ethiopia, longtime allies each with significant numbers of peacekeepers in the Horn of Africa nation.

A staff member at Kismayo airport, who gave his name as Ismail, said the plane took off from Gode in southeastern Ethiopia and eventually landed in the Somali town of Baidoa. It was not certain if the plane was civilian or military.

“It wanted to land at Kismayo airport but was denied clearance because it did not send information in advance,” Ismail told Reuters by telephone.

Incumbent Jubbaland President Ahmed Mohamed Madobe, who is seeking re-election this week, is a key security partner for Kenya, while Ethiopia has grown closer to the federal government in Mogadishu in the last year.