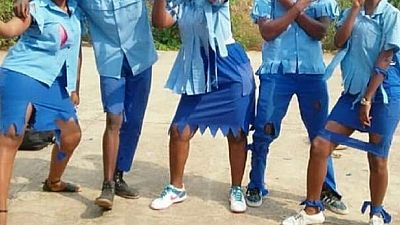 Earlier this week, the case of students ripping their uniforms after completion of the their high school exams popped up at Burundi’s national security meeting.

President Pierre Nkurunziza who led the meeting according to his spokesperson condemned the action joining earlier condemnation by authorities of the school in question.

Viral photos on social media showed students who had sort of “redesigned” their school uniforms cutting out portions, some left the ends of their skirts with zigzag shapes whiles the ends of their shirts and sleeves were shredded.

The incident is said to have taken place in the former capital city of Bujumbura. The teachers’ association were among the earliest groups to condemned the behaviour.

The president’s spokesperson, Jean-Claude Karerwa told the BBC that the president saw the episode as one that had to be dealt with by parents.

“Denying a diploma for such behaviour could be too severe,” Mr Karegwa said. This was in response to a threat by a headmaster of the recalcitrant students to withhold certificates of the said students.

Months back, school pupils were arrested by authorities for defacing the image of president Nkurunziza in their textbooks.

The action led to condemnation by human rights groups and also led to spike in online trolls of the president whose caricatured images were posted on social media.