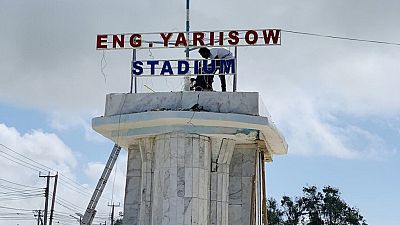 <p>Somalia named a stadium in the capital Mogadishu after its immediate past mayor, Abdirahman Omar Osman, who was killed in late July following an attack by Al-Shabaab operatives on his office complex.</p> <p>Mogadishu’s Konis Stadium was on Friday officially named after the late mayor affectionately referred to as “Engineer Yarisow”. </p> <p>The stadium as per photos shared on social media had been rebranded to the “Eng. Yariisow Stadium.” A special prayer session was also held in his memory.</p> <p>“Today we name this stadium after Abdirahman Omar Osman. He deserves more than this. Every hero who contributes to this nation will be remembered like that.</p> <p>“He was a fearless hero who served his people. That was one his qualities which we need to learn from him,” President Andullahi Farmaajo said at the memorial event.</p> <p>Following the attack which killed about seven people, the mayor and others victims were airlifted to Qatar for further medical attention but he succumbed to his injuries days later.</p> <p>His body was returned and buried in Mogadishu. The government earlier today also gave details into a probe of the incident.</p> <p>A Voice of America journalist, Harun Maruf, reported that the government disclosed the attack was carried out by a female suicide bomber with special needs and was assisted by a second woman.</p> <p>The duo worked for the local government without going through proper vetting process, the government added. The capital Mogadishu is led by governor of the wider Banadir region.</p> <p>Mayor Osman has previously worked in ministerial capacities including: Ministers of Information and Treasury. he has also acted at a point as government spokesperson and senior advisor to President/PM.</p> <p>Al-Shabaab confirmed that they were behind the attack. Somalia continues to suffer from the impact of insurgency waged by the Al-Qaeda affiliated group.</p> <p>The insurgents have routinely launched attacks in parts of the capital using suicide bombs and improvised explosive devices, <span class="caps">IED</span>s, which have often claimed lives and led to destruction of property.</p> <p>One of their recent high-profile attacks was in the Jubaland capital of Kismayo. The 14-hour assault on a popular hotel led to the deaths of 26 people according to official records.</p>

Today we name this stadium after Abdirahman Omar Osman. He deserves more than this. Every hero who contributes to this nation will be remembered like that.