Body discovered of British student who fell from plane in Madagascar

Police said on Wednesday they had found the remains of a British woman who fell 1,200 metres (4,000 feet) from a light aircraft in the remote north of Madagascar last month.

Alana Cutland, a 19-year-old Cambridge University student, was visiting the island on an internship complementing her studies in natural sciences, her family has said.

Police said the remains were found on Tuesday, and would be sent to the capital Antananarivo for an autopsy. Authorities are not pursuing a criminal inquiry in the case, Andrianoasy Ralaivaonary, local gendarmerie commander in Mahajanga, said in a statement.

According to police, Cutland opened the door shortly after take-off and the pilot and the other passenger on board were unable to restrain her from jumping out.

In a statement last week, Cutland’s family described her as “a bright, independent young woman, who was loved and admired by all those that knew her.”

“Her thirst for discovering more of the world always ensured she made the most of every second of her action-packed young life.” 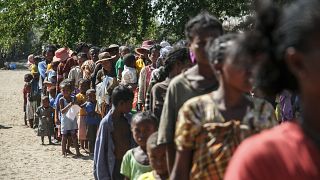