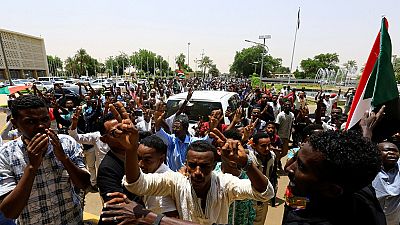 Thousands of Sudanese demonstrators are gathering against the killing of four students, as protest leaders and ruling generals prepared to resume talks to resolve outstanding issues on the transition to civilian rule.

“We came here today to demand justice for the martyrs: we must not lose it because we are all responsible for it: some demonstrators were under 15 years old, they died. The wounded are now in El Obeid hospital.

“We ask the military council to cede power because it is a civil revolution: it is enough because our husbands and children died for this country, because of you, the military council: when you came to power you said that you were the heirs of the late Suwar al-Dahab (former President of Sudan between 1985 and 1986, who handed over power to civilian leaders) and we hoped you would be like him but now you have let us down.

“You have killed our children in Khartoum and everywhere, and you have destroyed the children of Suwar al-Dahab,” added Fatma Adam, demonstrator

Since December, the repression of the protest against the Rapid Support Forces (RSF) has left more than 250 dead, including 127 demonstrators killed on June 3, according to a committee of doctors close to the protest. The authorities, on their part, gave a much lower assessment.